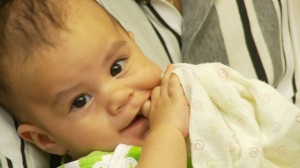 When Elizabeth and Stephen Helgen introduced their new son, Dylan, into the world it became an important event for a lot of people. Dylan is the first Hawaiian born baby from frozen, unfertilized eggs thanks to a new freezing process.

When Elizabeth was 22 she opted to have her tubes tied. Already a mother of two sons, she was certain that she was done having children and had the sugary to make that choice permanent. Little did she know that 19 years later she would once again feel the urge to have a baby. Despite what might have seemed like an impossible situation, Helgen was able to become pregnant again thanks to a modern medical procedure.

“I would call it a miracle.Yeah” said Elizabeth Helgen.

The couple was able to add another child to their family thanks to a process called vitrification. Unfertilized eggs are collected and dehydrated before being frozen. This prevents water from crystallizing inside the eggs and causing permanent damage. The process is aimed at women facing cancer who want to be able to have children once they are healthy, however it can also be used for women who want children in the future.

Though the technique is promising, it comes with a hefty price tag – both emotionally and financially. For some parents, it may be too much work for a pregnancy.

“It was a lot of stress, a lot of emotion, and at one point we just stopped the whole process because we couldn’t handle the stress and emotion anymore.”

To date, 600 babies have been born from this frozen egg process. Only 200 of those have been in the US, with Dylan becoming the first baby in his state. Unlike with older techniques, vitrification has a higher success rate with doctors able to save 95 percent of the eggs they collect and freeze.

“I’d say the pregnancy rate using frozen eggs is not quite that using fresh eggs. But they’re approaching that, maybe in the next several years. As additional incremental improvements in the procedure continue, the rate should approach that of fresh eggs” said Dr. Thomas Huang, PhD Laboratory Director.

Despite the medical wonder of it, the Helgen’s are just happy to have a new healthy baby boy.

“He was smiling early. He started cooing to us when he was six weeks old. Then he started looking around, following things at two months” said Helgen.

Currently, the process of freezing and storing the unfertilized eggs costs around $1,300. The invitro process can cost an additional $8,000 and $13,000 for the parents. – Summer, staff writer