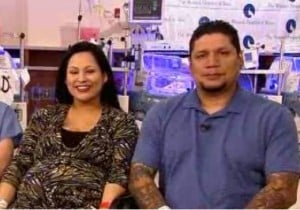 On Valentine’s Day, Tressa and Manuel Montalvo of Houston, Texas welcomed two sets of identical twins. Spontaneously and naturally conceived, the birth of the quads could be compared to hitting the parenting lottery.

“The incidence of spontaneous quadruplets is somewhere in the order of 1 in 500,000,” Dr. Brian Kirshon, a specialist in maternal and fetal medicine at Houston Perinatal Associates told Today Health. “And then if you take two sets of identical twins in the quadruplet set, the incidence must be one in many, many millions. It’s an extremely rare occurrence.”

Tressa and Manuel just wanted to give their little boy, 2-year-old Memphis, a sibling to play with. Then, at 10 weeks, the couple learned they were having twins. They’d just started adjusting to that idea when Tressa went in for a 12-week checkup where she would learn that she was carrying four babies.

“If I wasn’t already on the table lying down, I’m pretty sure I would have hit the floor,” Tressa told Today.

“The first thing I said was ‘Home run!’ and then I started jumping up and down,” he told Today

And that excitement apparently carried on into the actual delivery of the quads. Though Ace, Blaine, Cash and Dylan had only just been born (weighing between 2 pounds, 15 ounces and 3 pounds, 15 ounces), Manuel reportedly said that he’d be willing to keep trying for a baby girl, even with the five boys that his family has now. 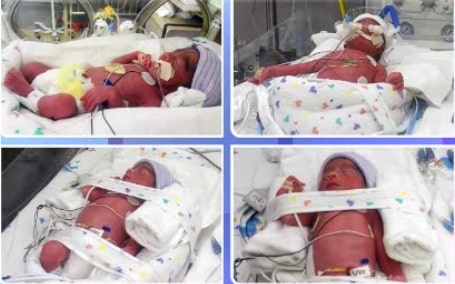 Tressa said she wasn’t quite ready to commit to the idea of having more children just yet.

“My husband was quick to answer for us in interviews,” she said. “For myself, I thought ‘OK, can we get through this first before I answer that?’”

But her reluctance to add any more children didn’t overshadow the excitement she felt just hours before the quads were born. Of course, there was a bit of nervousness beforehand as well.

“There were all these thoughts coming into my head,” she said. “There’s four human beings that are about to come into this world that are my responsibility and they are going to be home with me one day. And we are going to be a family of seven. This is amazing.”

Whether they decide on trying for a baby girl later or not, congratulations on their most recent additions is definitely in order for the Montalvo family!