Daddy day out! Cristiano Ronaldo was photographed in the stands on Thursday at the Mutua Madrid Open Tennis tournament with his three-year-old son Cristiano Jr. 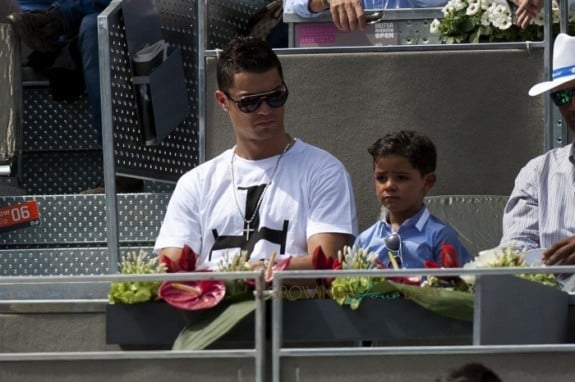 The Real Madrid football player kept it casual in jeans and a tee, while his son showed off a bit of style in a chambray button up and aviator sunglasses.

This Summer Cristiano will travel to Brazil to play for Portugal in the 2014 FIFA World Cup.  In recent months Cristiano Junior has been spotted attending training sessions, and also accompanied him to the Ballon D’or ceremony in January, which means he will likely be present at the prestigious tournament as well.

Cristiano recently told the Mirror his son was proud of his son’s obsession with the sport.

“When he was two years old, he always like cars. Now he’s mad for football, and is always like “daddy, daddy, let’s play”.

“I can’t say no to him because my dream is to see him playing.

“He’s already asked me for boots with studs, and striking the ball he’s already very good.

“He surprised me, it makes me all emotional!”