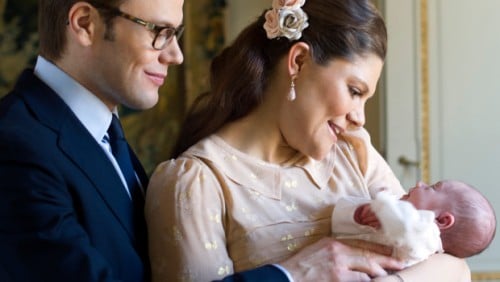 Now almost 5 weeks old, the tiny baby has been celebrated in Sweden for being the first Royal baby in 30 years.

Three-weeks-old when the photos were taken, the heir to the Swedish throne slept soundly through her first photoshoot, which took place at Haga Palace, the official residence of the couple since they started their family.

The day after her birth King Carl XVI Gustaf announced her name during a meeting of senior officials saying,

“It is a name which is very close to the heart of the princess and also the family,”

Estelle was the name of the American wife of Count Folke Bernadotte. Her maiden name was Manville and she died in Sweden in 1984.