There are some things in life that are nearly impossible to explain; until recently, the mystery of how a Cuban spy managed to impregnate his wife in Havana while behind United States prison bars 2,245 miles away. But it seems that the mystery is less of an impossibility to explain, and more of a story for the books—history and maybe even otherwise.

Gerardo Hernandez, the head of the spy ring known as the Wasp Network, was set to spend two life sentences in prison after being convicted of conspiracy to commit murder for his role in the Brothers to the Rescue shoot down back in 2011. Four Cuban-Americans died that day after Cuban Air Force MIGs blew up two civilian planes flying toward Havana to distribute anti-government leaflets.

Hernandez might have served those two life sentences, had it not been for the imprisonment of U.S. Contractor Alan Gross. Held in Cuba, Gross was released last week in a prisoner swap (Hernandez along with other intelligence prisoners) that marked the most significant diplomatic breakthrough between the U.S. and Cuba in more than 50 years.

When the swap occurred on Wednesday, Hernandez was smiling ear-to-ear as he was greeted by President Raul Castro and the kissed his wife, Adriana Perez. As cameras zeroed in on their embrace, it became clear that Adriana was most definitely in the later stages of pregnancy . . . but how? 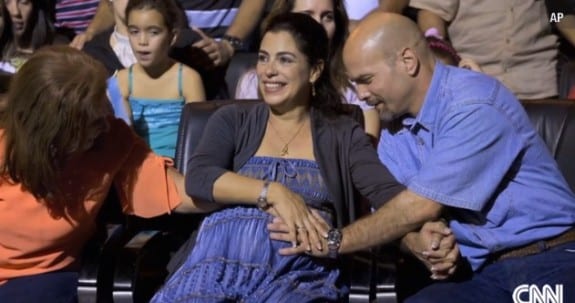 “Everyone’s asking, and we have had a lot of fun with the comments and speculations. The reality is it had to be kept quiet,” Hernandez told the government-run broadcast station that covered his arrival. “We can’t give a lot of details because we don’t want to hurt people who meant well.”

But when you look a little deeper, it turns out that the pregnancy isn’t as much of a mystery as it might seem at first glance; in fact, the answer is quite simple when you take into account the high-level talks going on between Cuba and the United States. All of those communications happened on back channels, since any leaks could doom the talks, but they did, in fact happen.

“One of the first things accomplished by this process was this,” Hernandez said, gesturing to his wife’s baby bump. “I had to do it by ‘remote control,’ but everything turned out well.”

According to two sources involved by the diplomatic talks, Hernandez’s sperm was collected in the states and the sent to Cuba. Adriana was then artificially inseminated. This was confirmed by the United States Justice Department, though no major details were given.

“We can confirm the United States facilitated Mrs. Hernandez’s request to have a baby with her husband,” spokesman Brian Fallon said. “In light of Mr. Hernandez’s two life sentences, the request was passed along by Senator [Patrick] Leahy, who was seeking to improve the conditions for Mr. Gross while he was imprisoned in Cuba.”

The pregnancy is likely to fuel even more anger from already furious Cuban-Americans who feel that the United States shouldn’t have been restoring diplomatic relations with Havana. However, Tim Rieser, an aide to Leahy who worked to broker the agreement with Cuba, said that helping Hernandez conceive was important to ensuring better treatment for Gross, and for reaching an agreement in the historic prisoner swap that took place last week.

“The expectation was that this man would die in prison. This was the only chance of having a child,” Rieser told CNN.

According to Hernandez, their baby girl is due in two weeks. She will be named Gema.