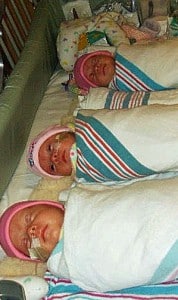 Pregnancy is a strain on any woman’s body, but for Kandace Smith, being pregnant with triplets was life threatening.

Last October Kandace, who suffers from cystic fibrosis, delivered identical triplet girls.  She is the first documented case in the world, of a cystic fibrosis patient having a successful triplet pregnancy.

Cystic fibrosis is a chronic and deadly lung condition.  The disease restricts the sufferer’s airways with thick mucus.  Patients must undergo physiotherapy everyday to clear their airways and maintain lung function.

The added pressure endured by the lungs, makes any pregnancy a dangerous proposition for a patient with cf.  Upon discovering that Kandace was carrying triplets, doctors raised fears that she might not survive the pregnancy.

She was urged to terminate.

“They told me that to have a termination would be better as it would make sure that I survived,” Kandace recalls.  “But I was determined.  I knew that it was going to be difficult and risky for me, but I wanted to take that risk.  I had never thought it was possible that I could ever be a mum, so I wanted to have that chance.”

Kandace endured the high risk pregnancy for as long as she could.  At 28 weeks, doctors at Tulane-Lakeside Hospital, in Louisiana, determined that her lungs were failing to a degree that necessitated the delivery of the babies.

“I was so worried about them because they were being born so early.  I just had to pray that they would all survive,” Kandace says.

The little girls: Brooklyn, Savannah and Dakota, came into the world weighing a frail two pounds each.  But they were strong.  None of them required a ventilator at any point and, to date, they are all healthy.  The babies were able to go home after three months in hospital.

The girls have been tested for cystic fibrosis and appear to be free from the disease, though they each carry the gene.

“It has been the hardest fight of my life,” Kandace says.  “But it has been worth every second.  I would have died for my girls if I’d had to.” – Jen R, Staff Writer