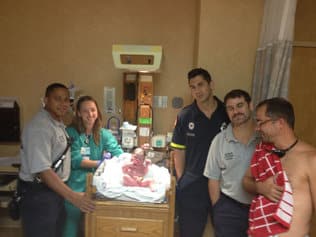 For Antov Antonov, the birth of his third child will always be extra special because baby Margarita decided to arrive into the world, not in a hospital or home, but right in the middle of a busy highway in their family car.

It was early morning on Tuesday when Antov’s wife Oxsana Aksenova went into labor and he was driving her to the hospital. But on their way Oxsana realized that the baby was already on the way.

Antov pulled over to the southbound lanes near Miami Gardens Drive and helped his wife deliver the baby girl.

Little Margarita was born at 4 am weighing 8 pounds and 6 ounces. With no other cloth around, Anton took off his shirt to wrap the newborn.

He also called emergency for help.

Miami-Dade Fire Rescue Capt. Eric Baum said, “The dad did an outstanding job. What was really great was that the dad had enough foresight to use his cellphone to call 911.”

Both Antov and his wife are from Russia and speak little English.

“I got delivery from my wife, my baby, it’s a first-time experience,” he said, smiling.

After the delivery, there was a small moment of panic when baby Margarita’s face had turned a little blue because of the umbilical cord wrapped around her. But by the time the rescue team arrived, the infant was healthy and pink.

The team cut the cord, also blocking half of the highway with a truck to keep the new mom and baby safe from speeding cars.

The two were taken to the Memorial Regional Hospital where they will stay for two three days before going home.

“We see traumas and violent events every day, and it’s always great bringing a healthy child into the world,” Baum said. “It’s a happy ending for everybody.”