Frank Roder, a construction worker from Winfield Park had a nice, peaceful afternoon in mind – he and his son, Aidan, were heading down to the Rahway River to feed the ducks. But the afternoon ended up being anything but peaceful when he stopped the car for a moment and Aidan hopped out.

“He hopped out, and I thought that was OK, I was just going to park,” Frank said. But before he could get the car fully parked, little Aidan “just took off, made a beeline for the edge.”

“The edge,” was a 35 foot ledge above the river. Running on pure instinct, Frank hopped out of the vehicle and ran to save his son, catching up with him just before he’d reached the edge. His son was safe.

But Frank didn’t even have time to let his heart rate slow down before Aidan’s eyes widened, looking behind his father, saying, “Um…Daddy….” Dad turned just in time to watch his Jeep take a nosedive down the 35 foot ledge into the murky water below. 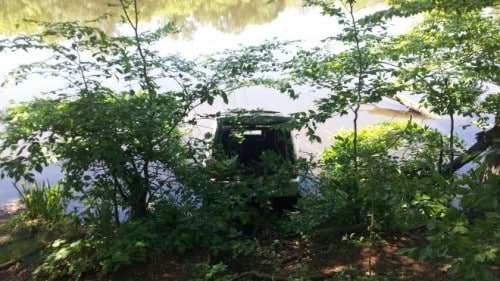 Like most parents that love their children, Frank was just happy that his son was okay. After all, a car is just a car. While Union County police pulled his car out of the water with a crane, he held onto little Aidan and realized that things could have been much worse, had he decided to take his six week old son, Joel, along for the ride.

“At the last minute, I told my wife to take him,” Frank stated. “I can’t even think about that.”

Ready to call it a day and be thankful that it was just his car that had been injured (although it did actually start up, even after its little swim), Frank got ready to take off and head for home. But just before he left, a young officer handed the hero dad two traffic tickets – one for failing to produce his insurance card (which was where most people keep theirs – in the now waterlogged vehicle) and one for not using his emergency brake.

“I couldn’t believe it,” Frank said. “He said, ‘If you would have taken the five seconds to apply the brake, this never would have happened!’ I say, ‘Really? And if I did and my boy stepped over the edge and fell instead of the Jeep, then where would I be?’ He says, ‘Jail, for child endangerment.’”

Union city Police Chief Daniel Vaniska told FoxNews.com that his officers have some discretion about when to write a ticket or when not to. And there just isn’t enough information for the Chief to go over the issuing officer’s head.

“It probably could have gone either way,” Veniska stated. “I can’t comment on the discretionary practices of an officer, but certainly, the fellow will have an opportunity to tell his story in court.”

And it seems that court will be the only place where Frank can receive any sympathy. The tickets, costing $60 and $50 don’t really matter to the father in the grand scheme of things; he has his son, safe and sound, and that’s what matters. He’s just confused by the principle of the whole thing.

“I don’t care, I’ll pay it,” Frank said. “It’s just the principle. When something like that happens so fast, I could give a rat’s a—about the car.”

Well said Dad! You’re a hero for abandoning the hunk of metal for your precious son, even if local officers don’t seem to see it that way. The court date for his tickets will take place on May 30th.  I hope he gets the tickets dismissed.