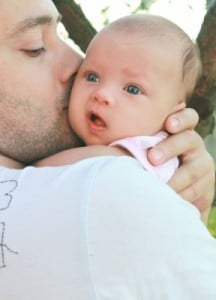 What makes one child more stressed than his or her peers? Is it nature or nurture? Genetics or hormone imbalances? Many have sought out the answers to these questions, but the data still comes up mixed. Some have found that nurture is more important while others are convinced that nature is more influential on the emotional development of a child. Still others believe that the true answer rests somewhere in the middle – somewhere between nature and nurture, maternal mental health and genetics, hormones and environment.

Several studies have found that the mental health of a mother, during and after pregnancy, can have a lasting effect on her child. In one particular study, researchers linked health and development issues of children to the early exposure of maternal mental health. But mothers aren’t the only ones with mental health issues, and they aren’t the only influence in a child’s life. Yet despite this fact, there haven’t been any studies on the impact that a father’s mental health may have on his child’s development and health…until now.

“The results of this study point to the fact that the father’s mental health represents a risk for child development, whereas the traditional view has been that this risk in large is represented by the mother. The father’s mental health should therefore be addressed in both research and clinical practice,”Anne Lise Kvalevaag, leading researcher and doctoral candidate in psychology told Medical News Today.

When the children reached three years of age, researchers questioned the mothers again, but this time they wanted to know about the child’s emotional, social and behavioral health. Mothers were asked if their children got into fights, displayed feelings of anxiety or suffered from frequent mood shifts.

Approximately 3% of fathers had reported high levels of psychological distress during the initial interrogation. Children born to these fathers had the most emotional issues at the age of three. While not a direct cause-and-effect association, this data indicated a connection between the father’s mental health during the mother’s pregnancy and the child’s emotional development.

Study authors said there could be several reasons for the link. Kvalevaag suggested that the fathers could be passing a genetic risk onto their children. She also said that it’s possible that the mental health issues of the father made their impression during the early development stages.

Daniel Armstrong, professor of pediatrics and director of the Mailman Center for Child Development at the University of Miami Miller School of Medicine suggested that it’s possible that the dad’s mental health issues effect the mother’s mental health issues, which, in turn, affects the unborn baby.

“If a father is highly distressed, that could affect the mom’s secretion of hormones during pregnancy,” Armstrong told Medical News Today. “It could affect her sleep, her own mental status.”

Whatever the reason, the study indicates that there should be some sort of attention brought to the mental health of fathers during and after pregnancy. And helping to improve the outcomes may be as easy as taking a couple of extra minutes during prenatal visits.

“This study gives a more complete picture. When we talk about preventative mental health and preventing these things in kids, we really need resources that at the prenatal stage for both the mother and the father,”  Michael Rice, associate clinical director of the Behavioral Health Education Center of Nebraska at the University of Nebraska Medical Center in Omaha told Medical News Today.  “When mom comes in for appointments, we should at least be raising the question of how dad’s doing. That’s probably a question that’s never asked.”