With Father’s Day just around the corner, it seems fitting that a new research poll has found that nearly 75% of the participants surveyed call fatherhood their ‘most important job.’ Today has surveyed approximately 2,000 parents, both moms and dads, to find out exactly what the dads of this day and age are all about. Gone are the old stereotypes. For example, 54% – over half of the fathers that were surveyed say that they change diapers, with only 37% saying that their own fathers changed diapers. 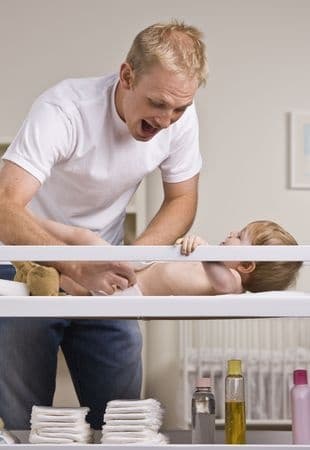 When asked about their main responsibilities, less than 48% of the men asked said that being the provider of income was their main role. Today, it is far more likely to find both mom and dad sharing the responsibility of bringing home the bacon. Speaking of bacon, 30% of fathers say that they are responsible for doing the grocery shopping for their family, while 26% say that preparing meals is part of their job.

Both mom and dad both agree that when it comes to the heavy parenting decisions, such as instilling their children with a moral compass, as well as enjoyable things like playing with the children and making them giggle, that they both share the responsibility. A staggering three-quarters of the dads surveyed say that being a father is their number one priority, and most important job. Approximately 51% say that they would quit their jobs just to be able to stay home with their children, if it was financially feasible. Thirty-two percent of dad’s talk about the disapproval they feel from others for being a stay-at-home dad.

A large amount of the dad’s of today are choosing to do things differently than the ways that they were raised. Even if it is just the little things, like coming home from work a bit early, or grabbing their kids for a quick hug, or just to tell them “I love you.” Seventy-three percent of dad’s talk about emotions, saying, “a real man knows how to express emotional support to his children.” Approximately 51% of fathers believe that it is possible to “have it all” in life, while 54% of moms agree.