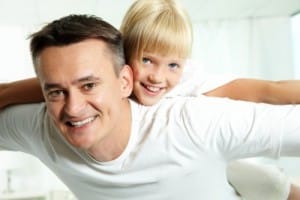 Since probably the beginning of time, we’ve heard that daughters marry their fathers. But is it really true?  While there have been some studies to give some weight to that theory, few have actually examined why or how the father-daughter relationship works in regards to a little girl’s future.  However, a recent study found that fathers may be determining more than just the type of man their daughters marry; some fathers may even be expanding their daughters’ career paths.

Schmader says she became interested in doing the study because, while more and more women are entering into the workforce, work roles within the home seem to be changing painstakingly slow. She wanted to know why we’re not seeing more equality in the home and why children are still lacking an egalitarian attitude.

To find out, Schmader and her team conducted a computer-based questionnaire using the Living Lab at Science World. More than 360 elementary school children were questioned, along with at least one of their parents. After analyzing the data, researchers found a strong association between the beliefs of fathers and the behaviors of their daughters in preference to toys, entertainment and their aspiration to work outside the home and take on a career.

“Daughters have more flexible ideas of what their future options to the degree that their dads have more egalitarian beliefs about men and women,” Schmader said.

Fathers who helped out with regular duties around the house, like cleaning, cooking and caring for children, had daughters that were less likely to choose the stereotypical “girly girl” activities, toys and past times than those that had fathers with more “gender specific” home roles. What’s more, Schmader suggested that families who make conscious and rational choices about dividing household chores more equally could be providing their daughters with the message that current and former sterotypes are outdated.