Home » David Beckham Walks The Red Carpet With His Boys

David Beckham and his two oldest sons Brooklyn and Romeo were dressed to impress while at the Sun Military Awards at the Imperial War Museum on Monday night. 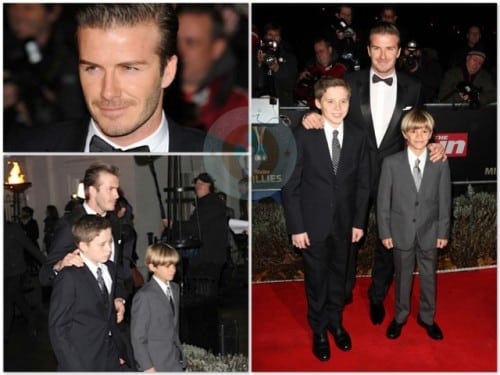 The whole Beckham family arrived in London just a couple days ago for the holidays and if the rumours are true, they may be saying good-bye to LA.

Many news agencies are reporting that 37 year-old LA Galaxy star is set to sign an 18 month contract to join Paris Saint-Germain. His 5 year contract with the Los Angeles Soccer Club will expire on New Years Eve.

Until then we hope to see them enjoying their time with family abroad. The family will be staying at their mansion in Hertfordshire, which is so decked out, it has been nick named Beckingham Palace.