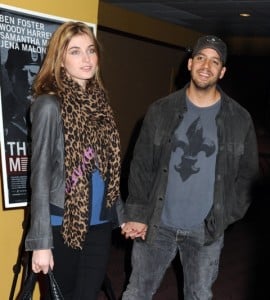 Famed Magician David Blaine and his fiance Alizee Guinochet had to catch a ride on a snow plow when their baby decided to arrive on a cold and snowy day.

The 24-year-old French model went into labor last Wednesday night just as a snow storm began dropping snow onto New York City. The couple, stuck in the bad weather, had to make an emergency run to the hospital to get there in time. Not able to get a cab, the pair hopped onto a snow plow that was clearing the streets.

The roads were so bad that no cars were on the road at all that day. The couple tried several times to call for a taxi, before spotting the snow plow come around the corner. Blaine managed to flag it down and get the pair to the hospital in time for their daughter to be born.

The private couple are not revealing information on the baby yet, but a source for the pair made a short statement to the news.

“Mom and baby are doing fine.

The new parents have been engaged since 2009.  The couple announced that they were expecting a baby last September. – Summer, staff writer