Home » David Spade Is A Daddy! 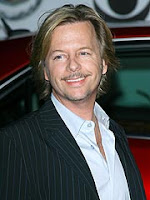 Congratulations to David Spade on the safe arrival of his first baby.

He is the father of a baby girl born last week in Missouri to Playboy Playmate Jillian Grace.

Even though the couple are no longer together, they have been in close contact throughout her pregnancy and he plans to go see the baby during his first break from shooting Rules of Engagement.

I am guessing that the official announcement was delayed until DNA tests were done one the baby.

“I had a brief relationship with Jillian Grace,” the Rules of Engagement star told TMZ in January. “If it is true that I am the father of her child, then I will accept responsibility.”