Glenna Whitman was driving along Cherry Lane on her way to church on Sunday morning when she noticed a stroller and a toddler alone in a vacant field. While the chance encounter helped saved the toddler, police later arrested her mom who had abandoned the baby girl in the field all night!

Glenna reached her church but she could not forget the image of the child in the field.

“Something was telling me, ‘Something’s not right,'” she said.

She told a friend Luanne Arden at the church about what she had seen and both returned to the site.

“We drove back here, and she was still here in the stroller,” said Luanne. “My heart just broke for her, because she was sitting here all alone. She was very dirty, with tears, snots, hair covered in fox-tails.”

The girl was wearing a t-shirt, shorts and no shoes. And she was only a few feet away from the edge of the road. 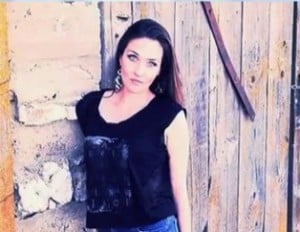 Kern County deputies arrived immediately. They found a blanket, a purse and shoes in the field. Believing that the mother lived nearby, they soon made contact with 34-year-old Stacey Nikkel.

She was arrested and booked on suspicion of felony wilful cruelty to a child and being under the influence of a controlled substance.

The police believe the toddler was left with her stroller in the field at around 10.30 pm on Saturday night. She spent almost 12 hours, in the dead of the night there alone, until Glenna found her.

“This one’s kind of strange, because we’re trying to figure it out ourselves,” said Sgt. Doug Wilson. “We’re still actively investigating this case, we’re still looking really for more answers to tie everything together.”

Glenna and Luanne tried to comfort the girl but were afraid initially to approach her as they thought she could be scared of them.

Glenna started speaking to the toddler when she asked for her mommy. Glenna then asked if she could hold her and the girl immediately reached up to her.

“She reached up to me, and she kind of just wrapped her legs around me and put her head against my neck,” said Glenna.

Police say that the child was taken into protective custody and placed at Jamison Center in Bakersfield. She was physically unharmed.

What is most shocking about the story is that a couple had been trying to adopt the girl and had permanent guardianship of her. Stacey and the pair had been locked in the custody battle,  but on June 9th a court had awarded custody back to Stacey. The judge at the hearing said he had to give her back to her maternal mother because of lack of evidence provided by the state.

Further investigation on the mother has revealed that Stacey was charged in 2012 with willful cruelty to a child, but that case was dismissed.

She is now booked at the Central Receiving Jail in Bakersfield. Her bail was set at $20,000