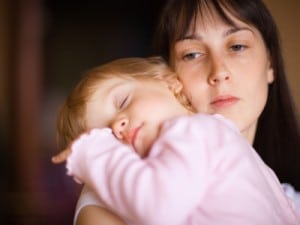 New moms are always sleep-deprived as per popular notion. But a new study suggests that the mother of a newborn sleeps as much as an average person, but is fatigued because of the disturbed quality of sleep.

The study conducted by lead researcher Dr. Hawley E. Montgomery-Downs, at West Virginia University followed 74 new moms in the second or 13th week of their child’s life or in the 9th and 16th week. The women were asked to keep sleep diaries and also wore a wrist-watch like device called actigraph on their wrist that recorded their movements during the night.

Researchers found that on an average the women got almost 7 hours of sleep per night during the first four months of a baby’s life. This amount is close to the general recommendation for adults and also according to previous studies more than the amount of sleep an average American gets.

The study also found that while the amount of sleep for new moms was similar to an average person, it was disrupted a number of times and moms stayed awake approximately 2 hours every night. Therefore it was not sleep deprivation but the broken sleep that was the real cause for daytime fatigue.

According to the researchers sleep occurs in cycles that last anywhere between 90 minutes and two hours. For a good night’s sleep a person must have a good number of sleep cycles but for new mothers whose sleep is continuously disrupted, they might not be getting any complete cycles of sleep in spite of being in bed for the recommended hours.

The popular advice given to new mothers is to sleep when their baby sleeps to counter their sleep deprivation, but this study challenges this advice as the researchers feel that a quick nap cannot help a mother feel rested unless it is at least for two hours.

According to Dr. Hawley it is therefore important to think of ideas that can help mothers get undisturbed sleep.

She said, “The sleep pattern,  is similar to what’s seen with certain sleep disorders, such as sleep apnea, where people log enough hours in bed, but get little restorative, good-quality sleep.”

“We need to think about what kinds of strategies can help consolidate sleep for these mothers”.

One suggestion was to pump milk and store it in bottles so that the mom was not the only person getting up at night.

Daytime fatigue may lead to many problems such as postpartum depression in women, decreased concentration at work or less ability to drive safely. The researcher said that it was important to reconsider the maternity work leave offered to women in US where they are not given any paid prenatal leave.

”So many women”, she said, “may have to go back to work at a time when ‘they should really be taking care of themselves’.”