Over the years, we’ve shared quite a few studies about television viewing among children. Some of the information is conflicting and confusing. Some of it is downright scary. And still some remind us that life is all about balance. A new article, written by Gemma Taylor, a research associate for the ESRC International Center for Language and Communicative Development at Lancaster University of England, only stirs the pot further. 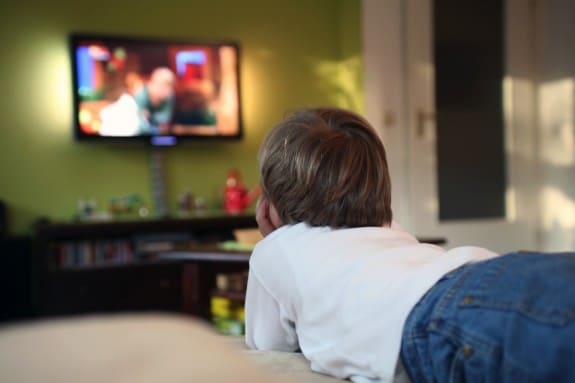 The American Academy of Pediatrics suggests that television be avoided completely until children reach the age of two. After that, they say it’s best to limit media exposure to only one to two hours per day, and that independent play is far superior to screen media when you can’t actively interact with your child.

But according to Taylor, there’s a lot of “scaremongering” going on. In fact, while she does stand behind the idea that television is far from a replacement for parents, she says that television can actually be beneficial, if the program is interactive.

“We know that children up to three years of age exhibit a video deficit—meaning they learn less from television than they do from live interaction. So it’s clear that children’s television exposure should be monitored,” Taylor wrote on The Conversation. “[But] there is still hope for educational children’s TV programs.”

Based on Taylor’s evaluation, repetition and interaction are the key ingredients to making television programs educational.

“Repetition within a TV show, such as repeating sequences or new words, or repeatedly watching the same show across a number of days can enhance children’s learning, memory, and transfer of information to the real world. What’s more, the more familiar the television character, the more likely it is that children will learn from a television program featuring that character,” she wrote. “Watching television with your child and giving them better feedback on their responses [to interactive children’s shows] will give you the opportunity to further support their learning from television.”

There does seem to be a bit of evidence backing her up on this one. In fact, a study conducted by Deborah Linebarger, director of the Children’s Media Lab at the University of Iowa in Iowa City mentioned some of the same programs as Taylor, suggested that interactive shows, such as “Blue’s Clues,” “Dora the Explorer,” or “Clifford, the Big Red Dog” could help boost language skills in children.

“When you have a show like ‘Blue’s Clues,’ specifically where a character talks directly to the child through the screen, that is exactly how you do language intervention,” Linebarger said. “That models how to have a conversation.”

However, Linebarger also warned against the use of such programs with children under the age of two.

“It keeps their attention, but they’re less effective at making sense of it,” she said. “To an older child, it’s a fantastic program, but for kids under two, it is not appropriate.”

But what about all of the other studies? The ones where behavior, eating habits, and even sleeping habits are affected by television viewing?

Most studies that note an adverse effect of television viewing have to do with either extensive TV time, or having a television in the child’s bedroom. These long hours of TV viewing have been shown, time and time again, to increase the risk of obesity, poor eating habits, and poor sleeping habits.

But one study, which looked at 1,800 children between the ages of six months to just under eight years of age, found that, for each hour of television viewing, children lost seven minutes of sleep each night. Children that had the greatest problems were those that had a television in their rooms by the age of four; they were found to have a half-hour reduction in sleep each and every night.

Another looked at the viewing habits of sixth-grade children. According to the authors, children that refrained from viewing television for a full five days were found to better recognize and identify human emotions than those that had not refrained from television viewing during that same time period.

And still other studies have shown that even just nine minutes of television can have an impact on a child’s level of concentration. Conducted on 60 four-year-old children back in 2011, the study compared the effect of nine minutes of fast-paced program viewing to that of coloring and slow-paced television viewing for the same amount of time.

Results showed that children who viewed just nine minutes of fast-paced programming had a decrease in mental function, and they struggled greatly with delayed gratification when compared to children who had watched slow-paced programs or colored. But, interestingly enough, there didn’t seem to be a noticeable difference between children that colored and children that watched slow-paced children’s television shows.

“It was the type of programming that actually made the difference,” child development specialist, Dr. Dimitri Christakis at Seattle Children’s Hospital, said. The fast-paced cartoon was associated with deficits in attention. The slow-paced was not. And this, I think, is critical for parents and, for that matter, educators and researchers to realize.”

So, could the key rest in knowing what to let your child watch while taking overall viewing time into account?

Many experts seem to think so, including Taylor.

“Yes, children’s TV does have the potential to be educational for young children,” she said. “But not all children’s TV programs are created equal. While some provide a good learning platform for young children, others are better suited to entertainment purposes only. Watching TV with your child and making the experience more interactive can enhance the educational value.”

What are your thoughts on the television viewing habits of children? We’d love to hear them!