The optimal timing for clamping the umbilical cord after birth has been a subject of debate over the past few decades. While evidence exists to support delayed umbilical cord clamping in preterm infants, studies haven’t been able to show strong benefits for term babies until now. 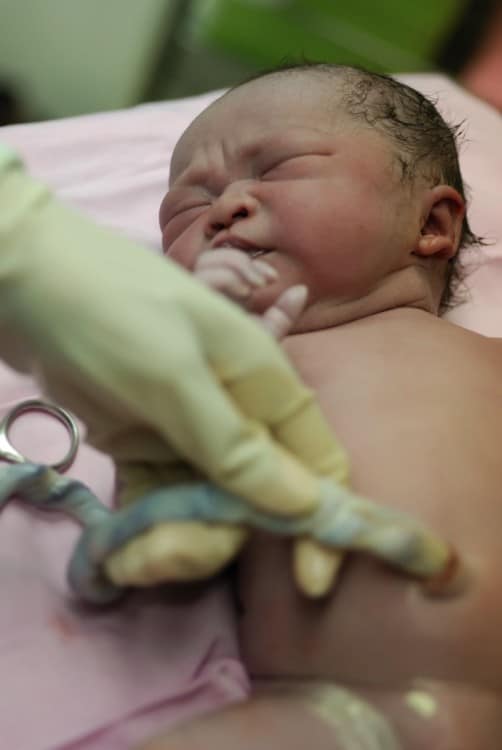 The team, that was led by Ola Andersson, M.D., Ph.D., of Uppsala University in Sweden, conducted a follow-up of a randomized clinical trial at a Swedish hospital to assess the long-term effects of delayed cord clamping on neurodevelopment in 4-year-old children. For their study, they looked 263 children (about 69 percent of the original study population) based on IQ tests, as well as development and behavior using other assessments and questionnaire where delayed cord clamping (141 children in follow-up) was greater than or equal to three minutes after delivery, and early cord clamping (122 children in follow-up) was less than or equal to 10 seconds after delivery.

During previous studies it was found that the biggest benefit of late clamping in term babies was lower frequency of iron deficiency anemia. This turned out to be a long term advantage as iron deficiency is associated with impaired neurodevelopment that can affect cognitive, motor and behavioral abilities.

Delaying umbilical cord clamping by two to three minutes after delivery allows the blood in the placenta to be transfused back to the newborn, which in turn, has been linked with improved iron status at 4 to 6 months of age.

While this study didn’t reveal a difference between the two groups for full-scale IQ, the proportion of children with an immature pencil grip was lower in the delayed cord clamping group and that group had higher scores in personal-social and fine-motor skill assessments. Oddly, the results for the girls, in all assessments were fairly equal. But the boys who had delayed cord clamping had higher average scores in several tasks involving fine-motor function and personal-social domains.

“Delaying CC [cord clamping] for three minutes after delivery resulted in similar overall neurodevelopment and behavior among 4-year-old children compared with early CC. However, we did find higher scores for parent-reported prosocial behavior as well as personal-social and fine-motor development at 4 years, particularly in boys. The included children constitute a group of low-risk children born in a high-income country with a low prevalence of iron deficiency. Still, differences between the groups were found, indicating that there are positive, and in no instance harmful, effects from delayed CC. Future research should involve large groups to secure enough power to draw clear conclusions regarding development,” the study concluded.