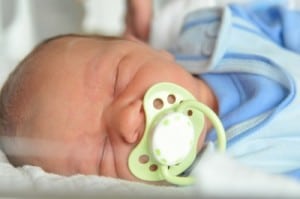 Breastfeeding moms have long been told the avoid pacifiers until breastfeeding is well underway to avoid “nipple confusion.” A new study suggests, however, that by avoiding pacifiers immediately after birth may actually increase the infant’s need for formula.

For the study, researchers implemented a pacifier policy at the OHSU Doernbecher Children’s Hospital in December of 2010. The policy would make the hospital a recognized “Baby Friendly Hospital” – a title designated for hospitals that followed the 10 Steps to Successful Breastfeeding. Created by the World Health Organization and United Nations Children’s Fund, the guidelines were developed to help promote exclusive breastfeeding and one of the steps listed included not providing pacifiers to breastfed infants.

To help implement the policy, pacifiers were locked up and nurse’s had to enter a code and the name of the patient in order to access them. The goal was to try and prevent pacifier use among breastfed infants, unless the infant was set to undergo a painful experience, such as immunizations.

Information was gathered on 2,249 infants starting in June 2010, before the policy came into effect, all the way to August of 2011, nearly a year after the policy was changed, so that researchers could determine how the new policy impacted infant feedings.

After analyzing the results, researchers found that exclusive breastfeeding rates in the mother-baby unit actually decreased. Before the plan was implemented, 79 percent of all infants were exclusively breastfed. At the end of the study, they found that only 68 percent were breastfed exclusively. Additionally, researchers found that the proportion of breastfed infants who were given formula during their hospital stay increased from 18 percent to 28 percent.

Study authors Dr. Laura Kair and Dr. Carrie Phillip from Oregon Health & Science University realize that they have made a recommendation that bucks current recommendations. They note, however, that current recommendation regarding pacifier restriction among breastfed infants has very little information to back it up. They hope that their study will help stimulate debate on how pacifiers should be used in a hospital setting.

“Our goal with publicizing this data is to stimulate conversation and scientific inquiry about whether there is sufficient evidence to support the universal recommendation of not offering pacifiers to breastfeeding infants in the first few days to weeks of life,” stated Dr. Kair.

While some of my babies used pacifiers, even shortly after birth, and others did not, I preferred breastfeeding for comfort in addition to breastfeeding for nutrition and feeding. I am uncertain as to why the infants were even given formula in the first place, instead of being placed with their mothers when sucking was needed for comfort or nutrition.

Breastfeeding infants really should be with their mothers during those first few days in the hospital so that breastfeeding can be a success. I’ve never been against using pacifiers, however, and have always felt that they are a device that should be left up to the infant’s personal preference.