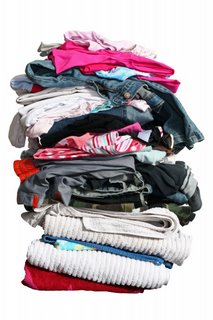 Could you imagine being the mom of 8 kids? I know that for years families normally consisted of 6-10 children, usually being done with less amenities than we have today. I just can’t imagine cleaning up after 10 people constantly in one house. I guess that is why Clerece Jennings, a mom from Ohio, won the contest sponsored by the OxiClean laundry detergent.

Jennings does from three to 12 loads of laundry a day. Her system involves separate loads for herself and her husband, Antwan, for her four older children and for her 18-month-old quadruplets.

Detergent for the family costs about $1,000 a year, so Jennings is happy about the five-year supply.

She said that her oldest daughter helps out by folding laundry. She plans to draft the rest of the family eventually but does not want to rush the younger children.

I always have lots of respect for women who can hold down a fort this size. Having 8 kids is one thing, but having a set of quads all running around getting into eveything is another. The laundry that those little monkeys generate could have won the contest on it’s own.