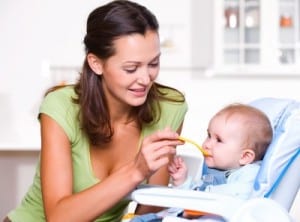 Prior to six months of age, health organizations say that only breast milk is needed. After that six month mark is reached, parents can start to introduce solids. But which solids should be introduced first? You might be surprised at what the Infant Feeding Joint Working Group (a collaborative effort between Health Canada, the Canadian Pediatric Society, Dietitians of Canada and the Breastfeeding Committee for Canada) has to say.

New guidelines from the Infant Feeding Joint Working Group now recommend that parents introduce foods that are rich sources of heme iron – like meat, fish and poultry – first. For families that would prefer meat-free iron sources, eggs, tofu and legumes are among the first foods that should now be introduced.

“While meat and fish are traditional first foods for some Aboriginal groups, the common practice in North America has been to introduce infant cereal, vegetables and fruit as first complementary foods,” Health Canada says on their website.

So why the big change?

At six months of age, breast milk and formula are no longer able to provide enough iron for the rapidly growing baby. This is because iron levels start to drop. And while iron-rich foods have been at the top of the list since 1998, the only named item on that list included “iron-fortified cereals.” Now, 15 years later, the list has been expanded.

Another reason for the change has to do with the fact that an estimated 30 percent of Canadian infants were thought to have low iron stores back in 1998. Combined with 14 different studies since then, the health group feels they have enough information to fully expand the list to cover more specific types of iron-rich foods.

So when do you hand your baby his first steak? (Okay, maybe not steak…) The group did add that parents should take their cues from baby on how often and when to start handing out meat, tofu, eggs and the like. They also say that breast milk should still be the primary source of nutrition as new foods are introduced.

Not mentioned in the study or in the recommendation is how to feed some of these foods to infants that are just learning to chew. (Obviously an infant couldn’t just dig into a steak or a chicken leg.) For new parents that have not reached the feeding stage yet, there are a couple of options that might help: The first is to puree the meat in a food processor or blender. The other is to purchase canned baby meat at the grocery store.