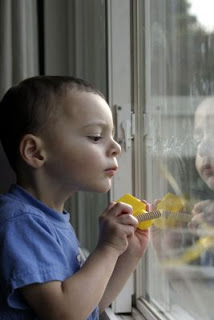 An 18-month-old Brazilian Toddler can thank his disposable diaper for saving his life after he fell from a third-floor apartment window.

Caua Felipe Massaneiro survived a 30-foot fall because his diaper snagged on a security spike embedded in the concrete wall around his apartment building in the northeastern Brazilian city of Recife.

The boy dangled from the spike for a moment, then “the diaper opened and the baby fell to the ground, but at a much slower speed,” a police officer said. “The diaper obviously lessened the impact of the fall and saved the baby’s life.”

“It was a miracle,” said the officer who declined to be identified because she was not authorized to speak to the press. “He could also have been killed by one of the spikes.”

The toddler was treated for minor fractures at an nearby hospital, where spokesman Gilberto Tenorio said he was in stable condition.

A local newspaper quoted Caua’s father, 23-year-old Alexandre Cesar Massaneiro as saying that his son climbed onto a sofa underneath the window he fell from –

“something he had never done before.”

“It wasn’t the diaper that saved him,” Massaneiro told the newspaper. “It was God.”