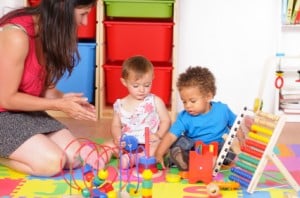 Toddlers are constantly learning. A new study shows that they can learn even faster when they are exposed to a wide range of toys. Offering toddlers a diverse set of toys, rather than ones that are all similar, may help them to build their brains faster and stronger.

Researchers at the University of Iowa, looked at sixteen 18-month-olds in how their speech developed from their play. The toddlers were given toys, and monitored to see how many words they learned while playing. Half of the toddlers were given a set of toys that were all similar, while the other half were given a variety of toys in different shapes and sizes.

The toddlers who were given toys that were similar learned 4 new words each week, which is average for a child at that age. However, the toddlers who had more diversity in their play were able to pick up 10 new words. The researchers feel it is the diversity of play that allowed them to grasp new words more quickly.

“The shape bias enhances vocabulary development because most of the words young kids learn early on are names of categories organized by similarity in shape. And, developing the ability to disregard shape for non-solids helps them learn words like pudding, Jell-O or milk,” said Perry.

The toddlers who had a variety of toys were also better able to place new toys in the correct categories. When presented with an unfamiliar bucket, those who had more variety did better at recognizing it as a bucket. Having more exposure to diverse toys seemed to help them better grasp new objects.

The results of this study have been published in the journal Psychological Science. – Summer, staff writer