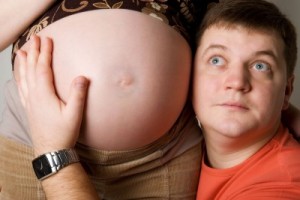 Food cravings, morning sickness, weight gain? Symptoms of a pregnancy? But what if it is dad getting all of these?

For some men, pregnancy affects them almost as much as women. Dr Arthur Brennan of Kingston University, London, studied 282 men that were about to become fathers. In his research, more than half of the men experienced some of the symptoms common in pregnancy.

Known as Couvade Syndrome, the incidence of men having sympathy pregnancy symptoms seems to be less rare than once thought. Cramps, mood swings, food cravings, morning sickness, and even fatigue were all signs that the men experienced during the course of the women’s pregnancies. And all of the symptoms may have a biological reason behind them.

Mr Brennan attributes the symptoms to a rise in the hormone prolactin. This hormone is usually found in high levels in mothers, and is associated with breastfeeding, for some fathers the levels of this hormone can increase as well. As the end of pregnancy nears, men may also have lower levels of testosterone in their bodies. Some believe this helps men prepare for their role as fathers.

Laverne Antrobus, a British Psychologist, TV presenter, and woman behind an upcoming TV special on fathers, studied men in their roles as fathers to see the changes themselves. In one experiment a group of men were given dolls to hold while the sound of an infant crying was played. The fathers instinctively rocked and cuddled the dolls, while the childless men were left awkwardly holding the dolls.

In another experiment, a new father was monitored as he held his newborn daughter. During that first cuddle, his prolactin levels rose 20 percent in just 15 minutes. Biological proof of parental bonding in fathers.

According to the research, pregnancy symptoms in men may be far more common than once thought. And it may have a hormonal function behind it. – Summer, staff writer