Home » Do Only Children Still Get Social Skills? 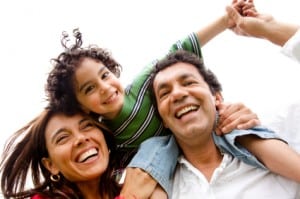 Only children are often thought to be lacking in social skills due to their non-exposure to siblings. A new survey, however, may show that being an only child does not inhibit a child’s social skills.

The study looked at 13,000 middle and high school students, both those with siblings and those without. What they found was that these teens and preteens seemed to have little to no social differences no matter how many children are in the home.

“I don’t think anyone has to be concerned that if you don’t have siblings, you won’t learn the social skills you need to get along with other students in high school,” said researcher Donna Bobbitt-Zeher of Ohio State University.

The research was done because many areas that have a trend in smaller families worried that an increase in only-children could cause an increase in social inabilities for everyone.

An earlier study did show that in kindergarten, only children has a social disadvantage compared to those with siblings. By this study, however, it is clear that what ever disadvantage there may be disappears by the teen years for most children.

In this study, students from 7th through 12th grades at more than 100 schools nationwide were asked to report their five male and five female friends. The researchers then looked for trends among those who were chosen and those who were not. Once the numbers were tallied, the researchers could not find a significant difference between those who had siblings and those who did not. Being an only child did not hinder a teen’s ability to make friendships.

“In every combination we tested, siblings had no impact on how popular a student was among peers,” she said.

Bobbitt-Zeher believes the change between the kindergarten study and the teen one is the years in between. Young children who do not get much interaction with other children may be at a disadvantage when they enter the school system. However, children are given many opportunities to learn how to make friends as they continue through school.

Of course, school is not the only place that a child can develop their social skills. As long as there are ample opportunities to interact with others in a positive manner they will grow socially and make friends. Only child or not. – Summer, staff writer