Placentophagy, or the consumption of one’s placenta – typically in pill form – has gained a great deal of traction in the mommy communities. Particularly prominent in the home birthing communities, but also making its way into hospitals, the practice is said to boost postpartum mood, reduce fatigue, and improve maternal bonding. However, there is no scientific evidence to prove whether the purported benefits are real or if the effect is merely a placebo. 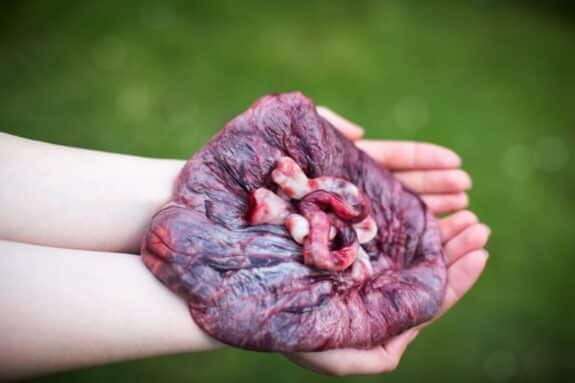 This is what researchers at UNLV set out to determine.

Led by the university’s Department of Anthropology and School of Medicine, the study followed 12 women who took placenta capsules after giving birth and 15 who were given a placebo. Researchers promoted the placebo by telling women that it would provide them with a variety of post-baby benefits, such as reducing their risk of developing the “baby blues.”

Results showed no real benefit to ingesting the placenta pill over a placebo. However, researchers did discover small but detectable changes in the hormone levels of the mothers who had ingested the placebo pill. While no one knows what (if any) benefits this may offer, it does suggest that placentophagy may not be a complete wash. Instead, it indicates that more research is needed. Yet researchers say they are concerned that both sides of the debate – those for and against placenta capsules – may argue that the study supports their standpoint.

“Placentophagy supporters may point to the fact that we did see evidence that many of the hormones detected in the placenta capsules were modestly elevated in the placenta group moms,” Professor Daniel Benyshek, senior author on the study, told Medical Life Sciences News. “Similarly for skeptics, our results might be seen as proof that placentophagy doesn’t ‘really work’ because we did not find the type of clear, robust differences in maternal hormone levels or postpartum mood between the placenta group and placebo group that these types of studies are designed to detect.”

However, the study really just shows how little we know about placentophagy – and how important further studies will be.

“While the study doesn’t provide firm support for or against the claims about the benefits of placentophagy, it does shed light on this much-debated topic by providing the first results from a clinical trial specifically testing the impact of placenta supplements on postpartum hormones, mood, and energy,” said Dr. Sharon Young, lead author of the study and program manager for UNLV’s Office of Undergraduate Research. “What we have uncovered are interesting areas for future exploration, such as small impacts on hormone levels for women taking placenta capsules, and small improvements in mood and fatigue in the placenta group.”