Mark and Mary Gundrum’s baby boy had a unique smile. Dominic had a cleft that made it seem like he was smiling twice. And though rare, the smiles had the capacity to charm everyone. But combined with the cleft, the little boy also had a condition where his brain tissue created a gold ball like formation on his face. It was this dual challenge that doctors at Boston Children’s Hospital were able to overcome and give the little boy a rare gift of life. 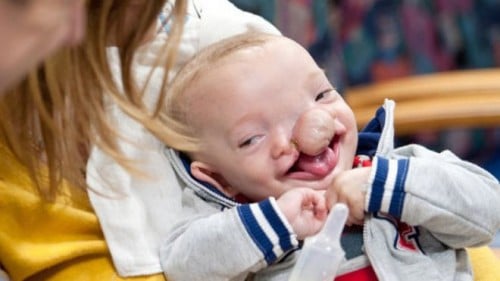 During the 20th week of pregnancy, a routine ultrasound showed the Gundrums that they were expecting a boy. What they also unexpectedly found out was that his skull hadn’t fused together properly early in the pregnancy, leaving a large, triangle-shaped gap running from his upper lip through the middle of his nose and forehead, a condition known as a Tessier midline facial cleft.

What was also revealed through the scan was that Dominic’s brain fluid and tissue that remain inside the skull, had seeped outwards through the cleft, forming a golf ball-sized bubble underneath the skin of his forehead. This condition is called an encephalocele.

It is extremely rare for a baby to have both conditions at once. The probability in the US is 1 child every 4 to 5 years. Doctors warned the boy might only live for a few days.

“At first we were told he would probably die within a few hours and that we should do our best to enjoy the pregnancy,” remembers Mark. “Over time his prognosis got better, and the doctors agreed he’d survive birth. But after that, they had no idea what may happen to him. It was a real no man’s land territory for all of us.”

Not giving up hope on their unborn child, the Gundrums began searching the internet for answers. They found the case of a boy named Dumanel born in Haiti with a severe encephalocele and who was successfully treated by Dr. John Meara, plastic surgeon-in-chief, and Ed Smith, MD, a neurosurgeon at Boston Children’s Hospital.

They immediately contacted the surgeon.

“I’ll never forget when Dr. Meara called and said he had seen this before and that everything was going to be OK,” says Mary. “We’d heard so many things over the course of the pregnancy, but ‘OK’ was a word that was rarely used. It was such an overwhelming feeling of joy, I called Mark immediately and said, ‘I think we’ve got to go to Boston.”

Dominc was born without complications and with his birth, the real challenge began for Dr. Meara and his team of experts.

The plan was to first remove the fluid and brain tissue from the part of the skeleton where it was coming out. This critical surgery was to be performed by Dr. Mark Proctor, director of Boston Children’s Brain Injury Center.

Next, Meara would perform extensive reconstruction of Dominic’s face, repairing the cleft and aligning the previously disconnected sections of skull while making sure his features were symmetrical.

The team discussed and prepared for weeks, their exact course of action.

“To correct a condition as complex as Dominic’s takes a lot of work, from many very talented people,” says Meara. “An operation like this can be dangerous and lengthy; if you don’t have the right team it could take up to 12 to 18 hours. But I knew with the right preparation we could work more efficiently, posing less risk to the patient.”

On the eve of the operation, Mary felt jittery.

“We’ve fallen so in love with Dominic over the past few months that the idea of changing him in such a dramatic way is a little bit difficult,” Mary said then. “In the long run it’s what’s best for him, but so much will change in one day. It’s exciting, but there is a small bit of sorrow knowing that tomorrow this baby I’ve grown to love so much will look so different.”

On the D-day a team of more than 15 surgeons worked tirelessly to reconstruct Dominic’s face. They carefully reconstructed the bones in Dominic’s jaw and eye sockets, as well as replacing the fragments of skull that had been removed to allow Proctor enough room to remove the encephalocele. 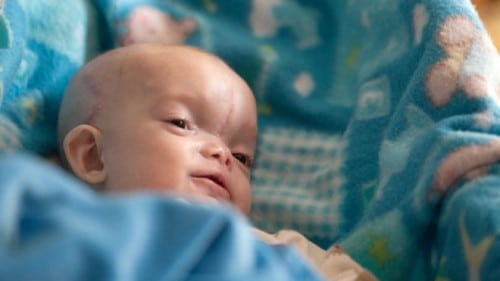 Nine hours later, Dominic was out of surgery with a new face.

“I was pleasantly surprised with how well things went and how efficiently our team worked,” says Meara. “Everything went according to plan thanks to the amazing efforts of the whole team. From Dr. Proctor to Dr. Goobie, the nursing staff, our residents and fellows, everyone’s role was perfectly executed. It was like working with the dream team of craniofacial surgery?this is why I work at Boston Children’s; there is no other team like this.”

After spending the next three weeks in ICU Dominic finally went home to Wisconsin with his parents. 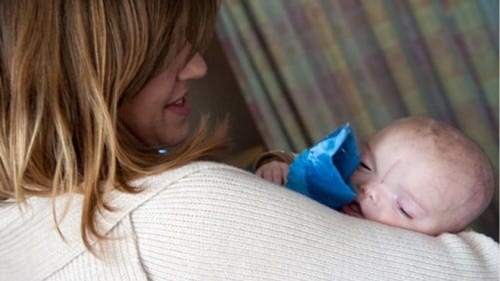 He will now be regularly monitored for by doctors and might need ophthalmologist to help his vision, as well as a craniofacial specialist, in case any of his features affected by the surgery change as he grows.

But his parents can’t thank the doctors enough.

“The day Dominic was born, a group of friends had a tree planted in our yard in his honor,” says Mark. “I remember thinking, 10 years from now, I’m either going to look at that tree and think of the son I lost, or watch him climb its branches. Right now, thanks to so many wonderful people at Boston Children’s and beyond, I’m excited to watch him hanging from that tree as they both grow bigger and stronger.”