When three year old Isbac was brought to a hospital in Peru by his father complaining of stomach pain, they never thought that the doctors would find a ‘parasitic twin’ inside the boy’s tummy. Called ‘fetus in fetu’ the tissues will be surgically removed today. 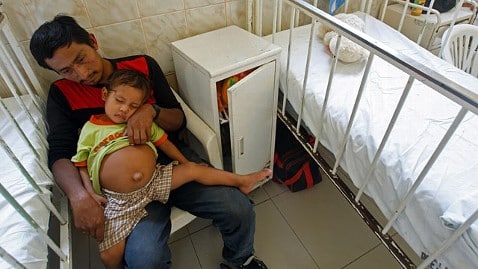 Leonidas Pacunda is a farmer who lives in Ajachin, a Aguaruna community in the remote Amazon region of Loreto. When Isbac, his three year old son, constantly complained of a stomach ache, the two travelled 375 kilometres to Chiclayo, capital of the Lambayeque region.

When Dr. Carlos Astocondor, a member of medical team at Las Mercedes Hospital, performed a CT scan on the toddler, he was shocked to find that the boy had the remnant tissues of a twin brother inside his stomach.

The doctor says that the condition occurs one in every 500,000 live births. Called fetus in fetu this happens when the zygote is being formed, before the formation of the embryo.

In Isbac’s case he found a partially formed fetus weighing one and a half pounds (700 grams) and nine inches long. Dr. Astocondor says that the fetus does not have any brain, heart, lungs or intestines, but a scalp to the skull, eyes and bones of the hands and feet.

The surgeon along with a team of 12 medics will operate upon Isbac on Monday to surgically remove the tissue.

Isbac’s father says that the boy always had pain but at his village no one really understood that the pain was actually caused by the undeveloped fetus. He also adds that doctors had told him that he was going to have twins, but that never happened.