Home » Doctors ‘Freeze’ Preemie to Save His Life

Pregnant with her third child, Claire Ives was relaxing at home, listening to her son’s heartbeat with a handheld device. When she turned the device on, the thought, at first, she’d been using it wrong. But the London nurse would soon learn that what she was hearing was a serious condition that could have cost her son his life.

“I thought I wasn’t listening right or something,” Claire told ABCNews.com. “I didn’t believe his [heart] rate could be that fast.”

Her son’s heart rate was beating at 300 beats per minute; that’s nearly double the normal rate of 160. Claire alerted her doctor of the abnormal heart rate. It was then decided that Claire should deliver her son, Edward, five weeks early via emergency C-section at the University College London Hospital. 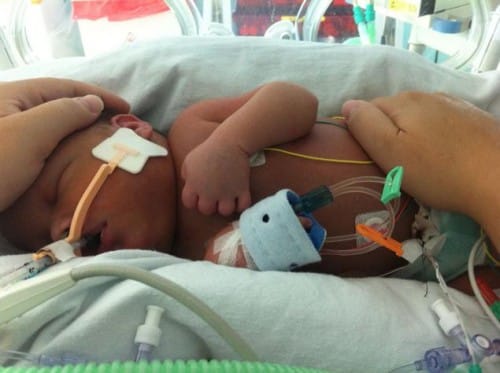 Edward was born with a condition known as supraventricular tachycardia (SVT). The condition is caused by improper electrical impulses in the heart. The result is a rapid, irregular heartbeat, can lead to heart failure. And because the heart to fill completely, it is unable to pump adequate amounts of blood to the body’s vital organs; eventually, this can lead to organ failure. Edward was only given a five percent chance of survival; his survival hinged on doctor being able to get his heart rate down to a more normal rate.

“I just thought he was going to die,” Claire said.

Just hours after being born, Edward’s heart rate rose to dangerous levels again. Doctors tried to reset his heart by shocking it and giving him medication, but it didn’t work. They only had one option left, one they had never tried for SVT; they would need to lower Edward’s body temperature to protect his organs and slow his heart.

“We’d gone through all the usual maneuvers that usually work in babies, giving drugs…trying to shock the heart, the baby and get [a healthy heart rate back],” Dr. Nicola Robertson, who works at the neonatal unit at the University College London Hospital, told ABCNews.com.

Over the next several hours, they used cold gel blankets to drop Edward’s temperature to approximately 91 degrees. The decreased body temperature would slow the electrical impulses that control the heart, giving it a chance to beat more regularly, which, in turn, would ensure that enough blood was reaching his vital organs. At first, it seemed that it would work, but as they warmed Edward up, his heart began to race again. Three days after the initial cooling, they would drop his body temperature yet again.

“That was one of the worst nights,” Claire said. “I asked one of the nurses if he was going to die, and she said he might.”

Doctors sent Claire out of the room and tried again to slow his heart rate by cooling him. This time, they also administered medication that is supposed to help slow the heart rate. Eventually, doctors told Claire that they were able to get Edward’s heart rate back down.

But until they warmed him back up, they wouldn’t know whether or not the treatment worked. So, this time, they raised his temperature at a slower rate – only half a degree every 12 hours. Amazingly, his heart rate remained stable, even after his body reached normal temperature.

“It was really strange highs and lows because he was doing extremely poorly,” Claire said. “But, oh, thank God! It worked.”

Edward continued to do well, and finally, 10 days after giving birth, Claire was able to hold her son for the first time. A month after that, she and her husband would be permitted to take Edward home, where he would join his two older siblings. Now, a healthy six-month-old baby boy, Edward is doing well. He’s been given an excellent prognosis, and though he is still being closely monitored to see if any irregular heartbeats arise, doctors don’t believe that he’ll need to be hospitalized for SVT again.

“It’s made me appreciate all the small things about my children,” Claire said, who is now planning to run a half-marathon that will help raise awareness for neonatal SVT. “It’s the best thing ever to bring him home.”