A baby, who was born with four hands and four feet, is said to be in stable condition after doctors in south China’s Guangdong province removed the baby’s extra limbs. 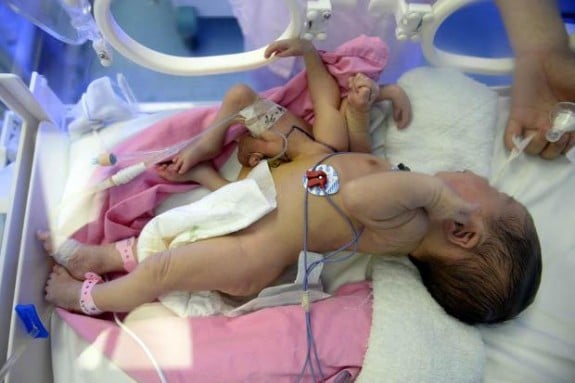 “They were supposed to be twins, but one had underdeveloped and became deformed.” adding that the baby had actual normal limbs but it also has an extra pair of arms and legs coming out from the right side of his body.

The father of the infant told the media he blames himself for the baby’s developmental issue saying,

“I have taken my son to different hospitals locally but none have been able to give me reasons for my child’s deformity. I only cared about my work. I just thought of making money instead of taking her to hospital for a medical checkup.”

Reports state, however, that the mom-to-me underwent five routine examinations at local clinics and small hospitals during the pregnancy, and nothing abnormal was detected.

Additionally the infant was also diagnosed with pneumonia and congenital heart disease before surgery.

While it is rare for a baby to be born with so many additional limbs, a baby in Pakistan successfully underwent surgery to remove his 4 extra limbs in 2012.