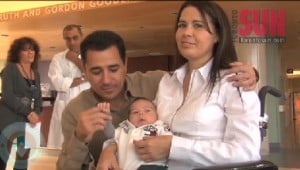 Standing on the thin line between life and death, Niolys Garcia and her newborn were saved by a dedicated team of medics who never gave up.

41 year old Niolys treasures each moment she and her baby boy Jacob Dariel are alive because 88 days ago, both came back from the dead after the medical team at Trillium Hospital refused to let go.

Niolys was having a difficult pregnancy from the very beginning and fifteen days before she gave birth, she had been admitted to the hospital as she complained of vomiting and feeling weak. She was sent home after a brief stay but on August 9th her husband 41 year old Ariel Collazo could sense that something was not right and she may be going into labour. He brought her back to the Trillium Health Care Centre in Mississauga a week before her due date.

“I remember when I came, I filled out the form, but after that I don’t remember anything,” says Niolys of that day.

She was taken into a birthing suite and appeared to be doing well but then she began complaining of pain and the nurses prepared for an epidural. 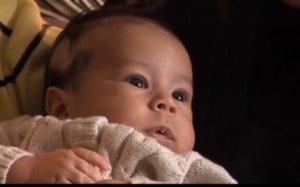 After two hours and 51 minutes Niolys’s heart failed according to Nurse Lynn Neil. She was resuscitated and a breathing tube was inserted. The ‘code blue’ alarm was also set for the baby which informed the obstetrics team led by Dr. Cathy Cowal to take immediate actions.

Baby Jacob began to appear but because Niolys was unable to push the doctors performed an assisted vacuum delivery. They thought it was important to let the delivery happen so that the pressure on the mother’s system could be reduced. “[Without this] it would have been very hard to save her” said the doctor.

Meanwhile Baby Jacob too was fighting for survival. As Niolys could not provide blood and oxygen to the baby because of heart failure, he was blue, not breathing properly and suffering seizures.  To avoid brain damage the doctors then lowered the body temperature of both mother and son drastically.

At five hours and 41 minutes old, baby Jacob began breathing normally and then he was placed on an intensive care nursery ventilator and sent to McMaster Children’s Hospital in Hamilton. After eight days, the miracle baby was brought back to Trillium when his seizures had stopped and the medics found his neurological signs normal.

Niolys’s condition on the other hand was getting worse. After delivery she was wheeled into intensive care where an internist suggested a possible stroke. Dark oil like blood was flowing from her nose, mouth and uterus. She needed transfusion until Dr. Cowal stopped the bleeding with a balloon inserted in her uterus. Again her heart seized and Dr. Bill Wong the anaesthesiologist, predicted the “likelihood of her living was very remote.”

The staff was not ready to give up though. They brought her into the cardiac operating room at 11.37 a.m. and for 90 minutes kept giving her CPR to shock her heart back to life. Dr. Gopal Bhatnagar consulted with anethesiologists and heart-lung machine operators, and decided to use a cardiopulmonary bypass unit, concluding “the alternative was death.”

Cyril Serrick, who operated the unit, said, “normally with anybody with pupils fixed and dilated, you’d be dead.”

Like superheroes, the nurses prepared the machine and massaged her heart and lungs to prevent clotting. Although her heart rallied, Niolys’s lung was still not functioning properly and that is when the team realised that a rare condition called amniotic fluid embolism was the root of the problems. 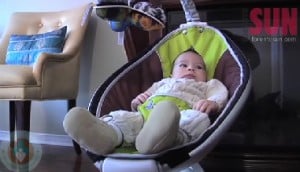 When Jacob was delivered the amniotic fluid had entered her blood stream due to a surgical cut. “Most doctors see that only once in their career,” Dr. Cowal said. The team then took a rare decision and hooked Niolys to an artificial lung normally used for preterm babies. In 20 hours, Niolys’s condition improved and she was placed in a standard ventilator.

Husband Ariel remembers he could not recognize his wife after the first attack because of the swelling. “There was so much blood.” Hospital staff warned them “she might have died,” he said. “It was a nightmare.”

On August 18 however Niolys opened her eyes, to see the photo of her newborn for the first time pinned on the wall with the name Baby Jacob. Confused, she asked questions and was soon able to hold him in her arms. Jacob was discharged on Sept 1 and went home to the care of his father, step-sister, grandmother and aunt.

Niolys was discharged on October 21, 88 days after the ordeal. She is now determined to be free of her cane and wheelchair and is going back to the hospital for her physiotherapy. 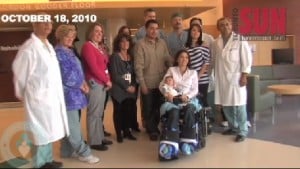 The family thanks the team at the hospital for tireless work to save both mom and son. The new dad also acknowledges the love and support of many who adopted the family, teaching him to take care of his son, helping his wife in her room as she recovered, strangers greeting them and just dropping to say hello or give a hug.

As summed up by Rita Maria Milian, Niolys’s mother, it was “Milagro”, the word for miracle in their native Cuban language. – Atula, Staff Writer