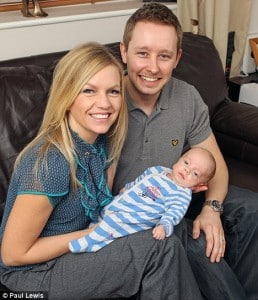 A newborn’s pinkish face just after birth is the first memory of their child for many new moms. But Valerie Leah doesn’t have this memory, because her son Oliver was born while she was in a coma.

In a real life story that has all the emotions, drama and challenges of a movie script, Valerie, a 35 years old expectant mom, was sick with the swine flu while she was 27 weeks pregnant and in a desperate attempt to save both mother and child, the doctors decided to put her in coma and perform a C-section.

It wasn’t until 3 weeks after she had actually given birth that she was able to finally hold her newborn.
‘My husband, Simon, told me we had a son, but by the time I was well enough to lay eyes on him around a week later, I found it almost impossible to accept that he was my little boy,’ she says. ‘I sat there, in my wheelchair, looking at this tiny scrap of life, covered in tubes and wires, who everyone was telling me was mine, and I just wept. None of it made sense.’

The couple, who already has two sons – Ben, 10, and five-year-old Lewis, said the ordeal began early November, 2009 when all members of the family were struck down with the H1N1 virus. Valerie was the last to catch the virus but her condition deteriorated fast and she was admitted to hospital with breathing difficulties
When she didn’t respond to treatment doctors decided to sedate her completely, and put her on life support.

Simon, Valerie’s husband knew his wife and baby’s life was in grave danger.

“I could see by the sombre faces of every nurse and doctor looking after her that she was slipping away,’ Simon recalls.’The baby was still three months off its due date, but they needed to get it out so that they could treat Valerie more aggressively. Otherwise doctors feared they’d both die.’

The toughest decision he had to make was to tell the doctor to save Valerie.

“I just kept imagining going home and telling our boys that they weren’t ever going to see their mummy again. At that stage, we didn’t know if we were having a boy or a girl and Val had hardly been showing. The baby didn’t feel real but Val, of course, was. It would have been dreadful to lose the baby, but losing Val was inconceivable.” 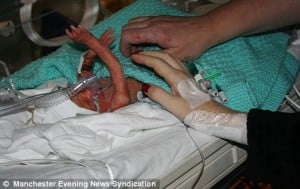 Baby Oliver later arrived by c-section weighing 2lb 10oz and was immediately whisked away to the special care nursery. While doctors were still unsure about the chances of recovery of mother and child, miraculously both started showing positive signs as days progressed.

In the meantime Simon kept their boys oblivious to what their mom was facing and kept praying. But when Valerie opened her eyes a week late she couldn’t understand her flat stomach. Then the confusion changed to bewilderment knowing that she had delivered a baby boy.

After three weeks, when Oliver was strong enough and so was his mom, Valerie was able to take him out of the incubator and hold him for the first time.

‘That, to me, was the moment he finally became my son,’ says Valerie.’In the days running up to that, I’d shed some bitter tears, because I felt we’d been so unlucky. But as I felt the weight of him in my arms, and held him close to my chest, I suddenly felt like the luckiest woman alive. It was as close as I was ever going to get to giving birth to Oliver. I’d never felt more blessed in all my life.’

But all is not lost for Valerie, because while she slept, the kind nurses who cared for Oliver kept a diary giving cute details of the first few days of his life. This, Valerie says, is a treasure she will hold for life as she also holds her now healthy three month old in her arms.