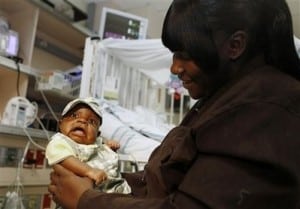 Doctors in Miami worked quickly minutes after Jordan Jamal Smith was born in March, to remove a 1.8-pound mound of liquid and tissue protruding from the newborn’s mouth that covered his eyes and nose, his cheeks and forehead.

During a routine 17 week ultrasound the technician noticed something odd on the screen. The growing fetus inside Kimberly Robinson had an abnormal shape on its face.

”I thought he was sucking his thumb,” she recalled.

Doctors soon discovered it was a rapidly-growing tumor, which sprouted out of the baby’s mouth like a large, inflated balloon. It would soon prevent him from swallowing amniotic fluid, which could cause the expectant mom’s uterus to swell and give birth prematurely.

She was told the tumor, an epignathus teratoma, would likely suffocate the baby after birth. If the child was lucky enough to survive — and he would probably not — he would likely be mentally disabled. Abortion, doctors told her, would only expedite the inevitable.

Instead, the hopeful mom returned to the hospital, where doctors would insert a six-inch-long needle into her belly to drain a liter of amniotic fluid building up inside her.

On March 25 Dr. Elvire Jacques, a UM obstetrician/gynecologist at Holtz Children’s Hospital and her 20-person team of doctors and nurses performed the Caesarean and kept the baby connected to his mother’s placenta after birth, while they found a way to get the baby to start breathing, despite the tumor covering the baby’s face.

In the last 50 years there have only been 70 similar cases of the rare condition. Of those, most of the babies had suffocated soon after birth.

Seconds after baby Jordan left the womb, he was whisked off by hospital staff. Robinson didn’t even catch a glimpse of her son. The baby had no visible face, only a red mound the size of two adult fists.

”Thirty-five percent of his own weight was sitting on his face,” Younis recalled.

When the doctor lifted the heavy tumor, he found what he was looking for: a mouth. The tumor, growing out of the child’s mouth, had left a small opening large enough to insert a breathing tube. Doctors wrapped the baby’s head and tumor in a large mask.

The amazing part is that beneath the heavy red mass Jordan’s face was untouched and unaffected.

Although Jordan’s facial bones and jaw had been pushed back and out of place, they were perfectly healthy. And like most babies, his bones were malleable. During the following weeks, his face slowly readjusted.

Now 2 months later, there is little evidence of this baby’s amazing journey.

His mom hopes that he will be well enough to come home next week.