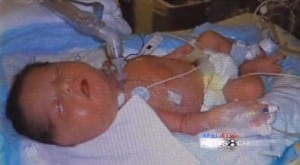 When she was five months pregnant Claudia Alonso was told by doctors that her baby had a tumor in his neck that could be fatal as soon as the baby was born. But instead of terminating the pregnancy, the doctors saved the life of the child.

When baby Benjamin was still in his mother’s womb, doctors at Fort Worth’s Cook Children’s Medical Center in Texas found out that he had a tumor growing under the skin from his neck to the skull. This tumor was blocking the baby’s airway and could turn fatal.

The doctors immediately began creating an artificial airway while the baby was still connected to the placenta. It was a scary moment for the mother as she knew that there were chances she may not see her baby alive. 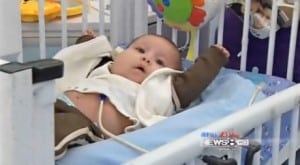 But doctors performed two more surgeries on the newborn to remove the tumor and he is already showing signs of recovery. With another operation scheduled, doctors hope that Benjamin will be absolutely fine and grow up as normally as other kids without the swelling he now has on his face.

If Benjamin later asks his mom why he has a swollen face in all his baby pictures, Claudia has an answer ready for that question too. She says she’ll tell him, “He is a miracle baby.” – Atula, Staff Writer