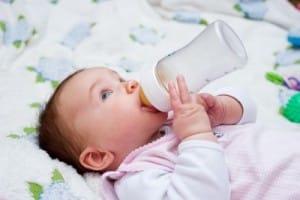 Dental experts are concerned by the rising cases of babies with tooth decay. They say it is the result of bottle feeding by parents to put babies to sleep.

A leading Australian Children’s hospital noticed an alarming rise of cases of children with tooth decay who were as young as 12 months. According to Associate Professor Richard Widmer of the hospital in Sydney, this was due to the prolonged use of bottles to feed breast milk or formula to infants especially when they settled down for the night with a bottle in their mouth.

The professor who studied the pattern of the decay in kids found that the rotting was found in the back of the upper front teeth showing the cause to be a bottle that is held between the baby’s tongue and upper teeth.

“We see more kids with decay, and we’re struggling to get them all done,” Prof Widmer said. “Some of the littlies are in pain. It is difficult some days.”

Dr Anne Stewart president of the Australian Dental Association Victorian branch urged parents to consider other methods of putting their baby to sleep and reducing the use of bottle- feeding during nap time.

“The aim is to try to get into a routine where you aim eventually to not feed the baby to sleep,” Dr Stewart said.”To help minimise those problems, don’t leave a bottle with anything, whether it’s breastmilk or formula, in the baby’s mouth when it falls asleep.

“The reason we don’t want that pool of milk left in the mouth is that the normal bacteria we have on our mouths uses the milk to produce acids, which is how tooth decay starts.”

Angus Cameron, the head of paediatric dentistry at Sydney University said that the decay in some cases was so bad that they had to remove the baby’s primary tooth.

Dr. Stewart cautioned parents that this initial decay could lead to health concerns later in life. “The primary teeth are hugely important for social development,” she added.

Ultimately, the best way to eliminate the risk for tooth decay is to not give a bottle at bedtime or  just offer a bit of water(babies over 6 months).  It is also a good idea to wipe the baby’s gums down with a cloth or gauze after bottle feeds to remove any bacteria containing plaque and excess sugar that may have built up. – Atula, Staff Writer