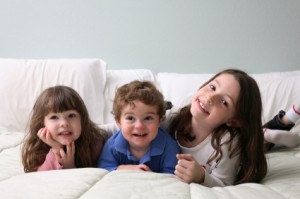 First child, last child, middle child? According to a new study, the order that your children were born could have an effect on their personality and intelligence later on.

Tiffany L. Frank, a doctoral candidate at Adelphi University in Long Island, N.Y., lead a study that looked that the birth order of children and how that order might affect them. What she found may not surprise many parents. First born children tended to be more intelligent over all, with stronger test scores in math and verbal ability. Younger children, however, faired better grade point averages and were often more outgoing.

The study is the newest of many have tried to find a link between birth order and place in life. Earlier studies found that those who were intelligent leaders, such as U.S. presidents, Nobel Laureates or NASA astronauts, were more often the first-born children. Middle children tended to come out as more independent and inventive. Younger siblings were often more carefree.

The study by Frank looked at 90 pairs of siblings in high school. The siblings were asked to compare themselves against their siblings in many different areas, such as academic performance, work ethic and intelligence. The academic records and test scores were also compared between sibling groups.

Of the students in the survey, first-born children had higher test scores in math and verbal ability, and were more prone to becoming perfectionists. The younger siblings often had better grade point averages in English and math, and were found to be more extroverted, sentimental and forgiving.

Though the study did not look at the reasons for these differences, the team has a few ideas about why this may be. First-borns may be more intelligent because of their one-on-one time with parents, time that many younger siblings do not get. However, younger children may feel the need to compete more with their older siblings, which could account for the higher grade averages. Also, younger siblings have more opportunities to see their older siblings try new challenges, giving them more confidence that they can overcome obstacles as well. – Summer, staff writer