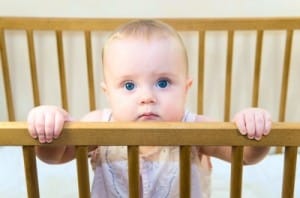 Chemical exposure can pose health risks for everyone, but infants are especially susceptible because of their still developing systems. It is for this reason that advocacy groups like Safer Chemicals, Healthy Families and Clean and Healthy New York focus so heavily on children’s products and the chemicals they contain.

Currently, there are 80,000 registered chemicals in the United States. These chemicals are used to manufacture almost everything we buy; soaps, shampoos, lotions, plastic cups and bowls, baby bottles and even the mattresses and bedding that our children sleep with. Only 200 of those products have been tested for safety by the Environmental Protection Agency. With so few chemicals tested, it can be hard to know which chemicals are safe and unsafe. To make matters worse, many chemicals have only been in use for the last few decades, so there is no data to support how many of these chemicals can affect long-term health.

“It’s the Wild West in your home when it comes  to chemicals,” Andy Igrejas, director of Safer Chemicals, Healthy Families says. “There are both known hazardous chemicals and chemicals whose health effects are still unknown that wind up in the products that come into our houses.”

Igrejas’ comment was made after reviewing a report on a study that was conducted on crib mattresses – a place where most infants spend anywhere from 12 to 16 hours a day.

Clean and Healthy New York took a look at 190 crib mattresses models manufactured by 28 different companies. About 20 percent of all the mattresses made “small changes with big claims” over the years; claiming their products were “greener” after adding an organic layer of cotton on top of the chemicals found within.

Some 22 percent of manufacturers refused to provide information about chemicals in their products, particularly the use of flame retardants, which have been linked to health problems. At least two companies were found to have at one chemical of concern – Dream on Me and Foundations. Additionally, neither one of these companies carried any “green models.” Out of all of the crib mattresses on the market, only three companies manufacture crib mattresses that contain no suspicious chemicals or allergens; White Lotus, Naturepedic and Vivetique.

Dream on Me manager Joe Olds says that he is confident in the safety of his mattresses. He says that the company buys pre-cut foam and mattress covers from other companies. “I’ve never had any problems. The only problem I had (is with consumers who) use the mattress for six kids and they call to say it’s worn out,” says Olds. He stands by his statement that the company sells good-quality, flame retardant, bedbug-resistant, waterproof mattresses.

Olds also stated that his company’s products are certified by the Juvenile Products Manufacturer’s Association, but the JPMA says they do not. In fact, the organization says they do not certify crib mattresses at all.