Every year, in the month of October, we raise awareness for Down Syndrome and the families affected by it. We discuss new developments, testing, lifestyle, and care. Yet, despite all the awareness, there are still some discrepancies as to what it’s really like to live with and care for a Down Syndrome child; and there are some conflicting beliefs on what life is really like for the people actually diagnosed with the condition. 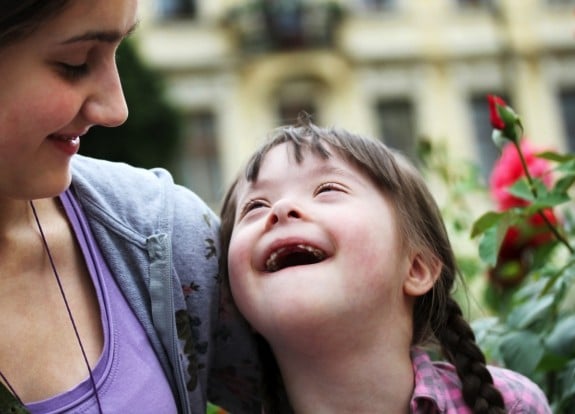 Divorce rates in families with a child diagnosed with Down Syndrome are actually lower, on average, in families that have children with other disabilities or no disabilities.

88% of siblings report feeling that they were better people for having a younger sibling diagnosed with Down Syndrome.

Of course, there’s still the question as to what quality of life looks like for those actually diagnosed with the condition; how they fare in happiness, enjoyment, and even self-sufficiency.

According to research, in a survey of people 12 and older with Down Syndrome, 99% of all respondents said they were personally happy with their own lives. This is despite the challenges they face, the possibility of surgeries, the special care that must be administered, and even the risk of Alzheimer’s disease in adulthood.

One researched facet of the Down Syndrome advantage has even found that, despite having lower IQ scores, children and adults diagnosed with Down Syndrome tend to score very strongly for “adaptive” skills. This behavior is described as “a measure of how well people are functioning in their environment, such as the quality of their day-to-day living and working skills,” Jamie Edgin, assistant professor of psychology at the University of Arizona, told Medical News Today.

So how does this all come into play when looking at available information for expectant mothers?

Well, as most pregnant mothers know, there are tests now available that can help determine whether or not a fetus may be diagnosed with Down Syndrome. In fact, we’ve come quite a ways from the invasive amniocentesis which, in and of itself, came with its own set of risks. Now we can do simple blood tests that help to identify certain markers for Down Syndrome.

Many have been concerned that the new test will increase abortion rates for those given a prenatal diagnosis of Down Syndrome, but other experts believe that this may not be an issue…especially if we take the time to explain the testing and quality of life to expectant mothers prior to actually conducting the test.

“A lot of people think it will go up, but I wouldn’t be surprised at all if it went down,” Jaime L. Natoli, a senior consultant in the department of clinical analysis at the Southern California Permanente Medical Group in Los Angeles, told Medical News Today.

Published in JAMA, a new study from the researchers at the University of California-San Francisco, actually shed some light on this subject. They found that, the more expectant mothers knew about the prenatal genetic testing available for Down Syndrome, the less likely they were to actually take the test.

After recruiting 710 women from California that were a maximum of 20 weeks pregnant, researchers randomized the expectant mothers into two separate groups: those that received usual care and those that attended an intervention group in which they were given access to an interactive decision-making guide and prenatal testing at no cost. Both groups were informed that prenatal testing was an option available to them.

The results showed that only 5.9% of the better-informed intervention group went on to receive genetic testing while 12.3% of the usual care group opted for prenatal genetic testing.

“This does not mean that women in general don’t want testing,” lead author of the study, Miriam Kuppermann, told Medical News Today. “But it does suggest that at least some women have undergone testing without having the clarity about the implications.”

The findings also show us that prenatal genetic testing may not be appropriate for all women, and that some moms do need “information that is readily understood and unbiased to enable them to make informed choices reflecting their own preferences and values.”

“As prenatal testing becomes easier with cell-free DNA testing, a highly accurate blood test for Down Syndrome, it is particularly important that women understand the implications of having this test so they can decide whether or not to opt for it,” Kuppermann said.

This more in-depth information about Down Syndrome may also shape what women decide their next course of action if they do opt for testing and discover that they are, in fact, carrying a fetus that may receive such a diagnosis.

Natoli also explained that families have significantly more educational, social, and financial support in the past, which contribute to family planning decisions. And we’re more exposed to Down Syndrome – in media, and in real life – which has helped to alter our former beliefs in what it is and what living with it really looks like.

“From a social standpoint, women of childbearing age are from perhaps the first generation who grew up in an era where individuals with Down Syndrome were in their schools or daycare centers – perhaps not in the mainstream integration that we see today, but still a level of exposure that was very different than in generations prior. They grew up watching kids with Down Syndrome on Sesame Street.”