Home » Down Syndrome Families Speak Out About Their Experience 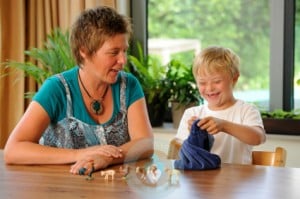 Currently, there is only way to check for Down Syndrome during pregnancy – an amniocentesis; a test that pulls amniotic fluid from the womb, which does pose a risk for miscarriage. This risk is thought to play a part in the fact that only 2 percent of women actually choose Down Syndrome testing.

No one really knows how many women choose to terminate a Down Syndrome pregnancy, but the numbers are estimated to be somewhere between 80 and 90 percent. With new testing available, some experts question whether or not the Down Syndrome community will disappear.

“Once everyone has the opportunity to learn prenatally with a simple blood test, what decisions will Americans make about pregnancies and will babies with Down Syndrome slowly start to disappear? People with Down Syndrome should be able to describe for Americans what it means to have the condition,” said Dr. Brian Skotko, a physician with the Down Syndrome Program at Children’s Hospital Boston.

Dr. Skotko recently conducted a series of surveys on families that are impacted by Down Syndrome. He found, through those surveys, that 96 percent of parents that have a child with Down Syndrome don’t feel any sense of regrets. In fact, nearly 8 out of 10 of those surveyed stated that their child had enhanced their lives – teaching them patience, flexibility and acceptance.

Louise Borke was just one of the families surveyed. She learned that her son, Louis, had Down Syndrome when he was just a few days old. She felt, “shock and surprise, trepidation and anxiety.” Yet, despite her fears, life with her son, “It’s been fun. It’s had its challenges – I won’t deny that – but it’s been fun. It’s been rewarding and I have no regrets,” Borke stated.

Even 88 percent of siblings stated that life with a Down Syndrome sibling made them “a better person” and 94 percent felt a sense of “pride” about their siblings.

Data was also analyzed on the feelings of those that actually have the condition. Nearly all Down Syndrome individuals said that they are happy with their lives and they like who they are.

Skotko hopes that the results, which are set to be published in the October issue of American Journal of Medical Genetics, will help families see the other side of Down Syndrome and enable them to make an educated choice about their unborn babies as the non-invasive tests become more available.