Good news moms-to-be!  That cup of coffee you’ve been dreaming of?  Go get it because a new study from The Research Institute at Nationwide Children’s Hospital has revealed that drinking and eating moderate amounts of caffeine doesn’t affect your child’s intelligence! 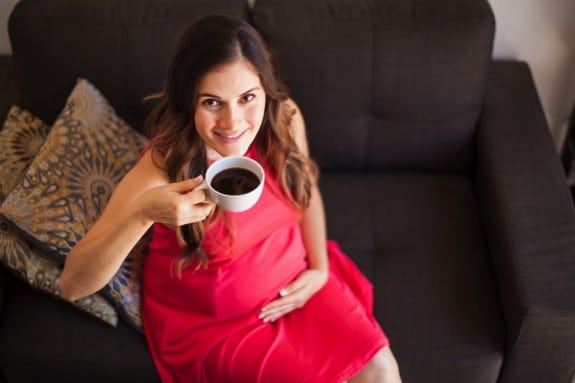 The study, which were published in the American Journal of Epidemiology, looked at how in utero caffeine exposure affects a child’s future intelligence (IQ) and behavior later in childhood, found caffeine did not lead to a reduced IQ or increased behavioral problems.

“We did not find evidence of an adverse association of maternal pregnancy caffeine consumption with child cognition or behavior at 4 or 7 years of age,” said Mark A. Klebanoff, MD, principal investigator in the Center for Perinatal Research at the Research Institute at Nationwide Children’s and faculty member at The Ohio State University College of Medicine.

The team analyzed a marker of caffeine in the blood of 2,197 expectant mothers who took part in the Collaborative Perinatal Project, a study that was initiated in 1959 to study factors influencing pregnancy and birth outcomes, and child health and development.

“The original cohort consisted of 55,000 women enrolled during pregnancy, recruited across 12 sites. The cohort was followed during gestation and after birth through age 7. This is one of two major mid-century studies conducted in the US that collected biological samples.”

The researchers chose this era because it was a time when coffee consumption during pregnancy was more prevalent than today, as there was little concern regarding the safety of caffeine. Therefore, the study was able to investigate a broader range of caffeine intake than if a similar study was done today.

For the study then looked at the association between a chemical called paraxanthine, caffeine’s primary metabolite, at two points in pregnancy. They compared those levels to the child’s IQ and behavior at 4 and 7 years of age.

Researchers found there were no consistent patterns between maternal caffeine ingestion and the development and behavior of those children at those points in their lives.

This study follows previous research regarding caffeine consumption during pregnancy conducted at The Research Institute at Nationwide Children’s. Dr. Klebanoff and Sarah Keim, PhD, co-author and principal investigator in the Center for Biobehavioral Health at the Research Institute at Nationwide Children’s, published a study in Epidemiology in March 2015 involving the same group of women from The Collaborative Perinatal Project and found that increased ingestion of caffeine during pregnancy did not increase the risk of childhood obesity.

Of the children in the study, about 11 percent were considered obese at 4 years and about 7 percent at 7 years. However, the researchers found no associations between their mother’s caffeine intake and these occurrences of obesity.

“Taken as a whole, we consider our results to be reassuring for pregnant women who consume moderate amounts of caffeine or the equivalent to 1 or 2 cups of coffee per day,” said Dr. Keim, who is also a faculty member at The Ohio State University College of Medicine.