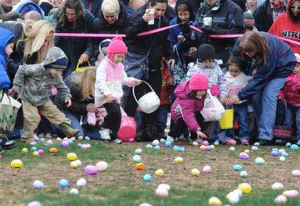 Kids in Old Colorado City will have to find  other festivities to participate in this year now that the annual Easter Egg hunt has been cancelled.

Held for the last nine years at Bancroft Park, the popular Springtime event attracts hundreds of families who come so that their kids can collect some of the candy-filled plastic eggs that are scattered across the park. But, thanks to greedy parents, the annual event has been cancelled this year.

According to organizers quite a few parents jumped the ropes and joined the children-only hunt.

“It’s sort of got out of hand,” Dave Van Ness, executive director for the Old Colorado City Associates, said.

“There were disgruntled people because there either weren’t enough eggs to go around or some kids didn’t get one,” Van Ness said. “Parents would get aggressive.”

“Rather than create ill will, let’s just not do it,” he said.

It’s pretty sad when parents can’t just sit back and let their child participate. We are in a generation now where everyone has to win. Everyone gets a trophy. This was a fun-filled community event that was created to bring the community together and also drive business to the city’s core.

“We’re very disappointed that the exposure that we would normally have we’re not going to get this year,” Molly Smith, owner of Republic of Paws, a shop near Bancroft Park.

Whether or not the event creates revenue for nearby businesses, those that live and work in the area said they want to see parents act their age.

“Just chill out a little bit,” Jennifer Reid, a teacher in Old Colorado City, said. “Let these kids enjoy it!”

Van Ness said he is not sure if the Easter egg hunt will be back on next year.