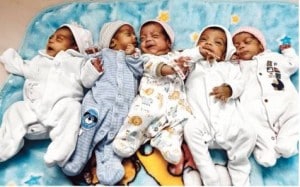 Five of the Six Sextuplets

A homeless Egyptian couple has welcomed a set of sextuplets at a hospital in Dubai.

A team of 30 medical staff were on hand to deliver the three boys (Mohammad, Ahmad, Khalifa) and three girls (Israa, Sara, Donia).   The smallest baby, Sara arrived weighing 800 grams, while the biggest Donia, was a tad bigger at one kilogram. who are currently under continuous monitoring at the hospital.  When the news media visited the family in the hospital, there were only five of the babies. The sixth baby, Khalifa, was recovering from abdominal surgery in another hospital.

Parents Sayed Mohammad, 37, and Soraya Foully, 32, are said to be pleased the their babies are doing well, but concerned that they may not be able to support them financially.

The sextuplets, who are considered the first sextuplet’s to be born in the capital city, arrived on October 12th.

After 12 years of trying to have a baby the couple turned to hormone injection therapy, which helps hyper-stimulate the ovulation process, thus increasing chances of fertilization.

Their baby joy turned to concern when they learned that they would be having sextuplets.  Sayed only earns Dh2,000 from working as a driver and the one bedroom apartment that they were living in has been knocked down. Until yesterday, the couple was homeless and had no idea where they were going to live.

Additionally, a National Health Insurance Company (Daman) is looking into health insurance solutions, a diaper manufacturer is pledging to send  1,500 diapers and a large corporate bank has offered to gather donations from its employees to help the family get through the crisis.

It really is amazing to see how people will come together for a family in need.  And while many will say that they put themselves in the predicament, the babies are here now and will need lots of supplies to keep them safe and healthy.

We wish this family the best and hope that the this help allows them to be able to enjoy their babies!