Gabby Williams isn’t like most eight-year-old girls. Just as dependent as the day she was born, Gabby is fed, diapered and fed by her mother. She still has the face and body of a newborn. This little girl from Billings, Montana has a condition that has drastically slowed her rate of aging. The condition is so rare and mysterious that it doesn’t have a name. 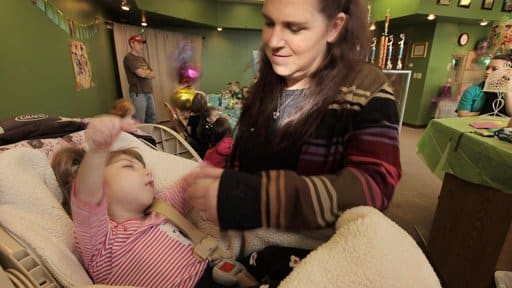 Only a handful of other people in the world share Gabby’s condition – a man from Florida who is 29-years-old, living with the body of a 10-year-old child and a 31-year-old woman from Brazil who is the size of a 2-year-old. For Gabby, the condition has slowed her age progression so drastically that she still only weighs 11 pounds.

“Gabrielle hasn’t changed since pretty much forever,” Gabby’s mother, Mary Margret Williams, 38, told ABC News. “She has gotten a little longer and we have jumped into putting her in size 3-6 months clothes instead of 0-3 months for the footies. Last time we weighed her, she was up a pound to 11 pounds and she’s gotten a few more haircuts. Other than that, she hasn’t changed much since the [2012] show.”

For two years, medical researcher Richard F. Walker has been working with Mary, who works part-time at a dermatologist’s office, and her husband, a corrections officer for the state, on their daughter’s condition, trying desperately to figure out why Gabby doesn’t age.

“In some people, something happens to them and the development process is retarded,” Walker, from the University of Florida Medical School, told ABC News. “The rate of change in the body slows and is negligible.

In addition to taking on Gabby’s case, Walker has been studying the two other people, both of which have some striking similarities to Gabby, to see if he can find a common genetic off-switch that has hindered their growth weight. It is his hope that, by discovering this switch, he can stop the degeneration of old age.

“My whole career has been focused on the aging process,” Walker said. “My fixation has been not on the consequences but the cause of it.”

But the lack of age progression of people like Gabby isn’t exactly positive. While they have a growth rate of only about one-fifth the rate of others, they also live with a variety of medical issues, including deafness, an inability to walk, eat or even speak.

Walker explained to ABC News that the psychological changes that happen after reproduction are essential for human growth. He calls these changes “developmental inertia.”

“Without that process, we never develop,” he said. “When we develop, all the pieces of our body come together and change and are coordinated. Otherwise, there would be chaos.”

But developmental inertia doesn’t stop. We continue to age, with the first subtle changes seen in the 30’s and then even more noticeable changes in the 40’s. As we continue to age, brain function starts to slow, and problems like dementia, Alzheimer’s and more come into play. Walker says, if could find the shut-off switch, he believes he might be able to stop this from happening.

That doesn’t mean that people won’t die, of course. Disease and accidents would still cause death among the general population.

“But you wouldn’t have the later years – you’d remain physical and functionally able,” he said.

For Gabby’s parents, though their daughter “fit the model,” they were a little concerned as to how the science would be used. They weren’t exactly fond of their daughter becoming a guinea pig for finding a so-called “fountain of youth.”

“There was some concern,” Mary said. “We are good Catholics, God-fearing people and we believe we are meant to get old – the process of life – and meant to die. It was scary to think about, and we did not want to be a part of it.”

But as they got to talking with Dr. Walker, they realized that his research wasn’t to stop people from aging, exactly, but to help people who are struggling with the impairments of old age.

“Alzheimer’s is one of the scariest diseases out there,” Mary said. “If what Gabrielle holds inside of would find a cure – for sure we would be a part of the research project. We have faith that Dr. Walker and the scientific community do find something focused more on the diseases of aging, rather than making you 35 for the rest of your life.”

And there was something in it for the Walker’s as well – the possibility of answers regarding their daughter.

“We’ve been on this journey to find out, are my other children at any risk in having a child like Gabrielle,” Mary, who has five other children between the ages of 1 and 10 said. “We did find out with Dr. Walker, when he did the [gene] sequencing, that it’s not something we can pass on, but just an abnormality, a mutated gene that was just happenstance. That was a relief for us.”

But as far as life-span for Gabby, no one really knows. However, Mary says she doesn’t dwell on that thought because she feels grateful for the time that she’s already had with her daughter.

“From the time of her birth, we didn’t think she would be with us very long,” Mary said. “The fact is, she is now going on 9 years. She kind of surpassed my expectations from the get go. It’s not something I worry about. When [God] is ready to take her back, it will be sad, but what a glorious thing it will be for Gabby to go to heaven one day. I know it will happen, but I am not hoping it’s any day soon.”