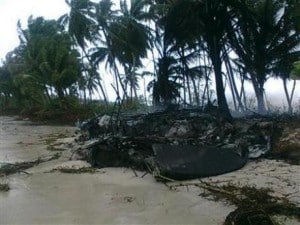 The remote Mentawai Islands just off the coast of Sumatra suffered the affects of a devastating tsunami and a volcanic eruption that took the lives of thirty two people, this past Monday. Even though the natural disaster dealt a catastrophic blow to the Islands a local old boy discovery a shinning beckon of hope.

Two days after the tsunami hit a local ten year old boy came across an eighteen month old baby nested in a clump of trees. The baby boy is recovering in an emergency health care facility use to aid disaster victims.  Sadly, his parents didn’t survive.


An earthquake that measured 7.7 on the Richter sale was responsible for creating the ten foot wave that collided with a set of Island located off the coast of Sumatra. The wave washed out many of the local villages causing mass destruction and chaos. It was reported that four hundred of the local residences are still missing.

An official spokes person commented on the travesty. “Of those missing people we think two thirds of them re probably dead, either swept out to sea of buried in the sand”.

Local residence that survived the ordeal reported that there was no substantial warning of disaster. Officials have since commented that key elements of the alarms and warning system were down on Monday.

As we report, medical assistance is arriving via helicopter and a fleet of warships have been deployed to the location of the disaster but have been delayed due to the violent weather systems in the region. – Jeff, Staff Writer