First I want to say I have nothing against Fisher Price. Anyone who reads this site regularly will know that Fisher Price toys are amongst some of my favourites for my baby. My issue lies 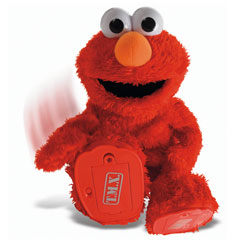 On September 19, Elmo TMX was released to grand fanfare on “The View”. He comes in a secretive case and says “No Peeking” if you try to look inside. Very Cute.

Not long after, stores starting clearing out of these red fluffy dolls, then they started appearing on Ebay. This made it impossible for regular people like you and I, who would like to purchase just one – to put away for Xmas. The people who were buying these toys were not parents. They were re-sellers. People who strip the stores of their inventory and sell it back to you for double.

This could all be avoided if a one per family rule was implemented. They know what happened last time. There was a chance it could happen again so…protect the people who support your company. The stay at home mom who can’t afford to pay $100-$150 for a giggling, knee slapping, rolling doll. 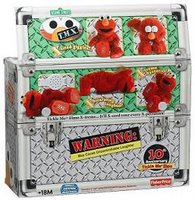 What needs to happen now is that no one purchase these dolls for more than their original retail price. Paying the money is driving the demand. Elmo TMX needs to be boycotted!! Not from the major retailers that are charging $40.00U.S. or $50 Cdn (give or take 5 bucks), but from anyone who is charging double.

Lets be honest he’s cute, but not $150 or $500 cute. Your child doesn’t need it that bad. Just a few months ago I dusted of my original one just see to what my son thought. First of all he was really loud. I had to tape his speaker so that he didn’t do hearing damage. Second, my son likes him, but not for long periods of time. Just long enough to watch him jump around and then he crawls off to the next toy.

If you are going to support Fisher Price you can get one of their Laugh and Learn products which have two modes, learning and singing. This line of toys keeps my son happy for HOURS.

Update: Amazon.com is selling them for $168U.S. to $370U.S. I don’t believe that they are selling them from their warehouse, I think they are just doing an Ebay type thing without the bidding. All of the “sellers” are different names.

PARENTS REMEMBER: Demand drives price! No demand = lower price. Why do you think that stores put stock on sale? Because no one wants it …lower demand + high stock = $ALE. Do not buy any Elmo that is over $50 unless it is for a charity that your very fond of…Afterall there are still 2.5 months till Xmas. Anything could happen.