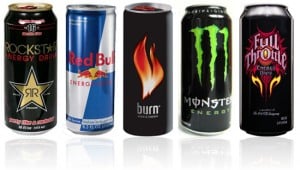 Common energy drinks are everywhere, filling the shelves of most stores next to the soda and bottled waters. However, according to a new report, they may also be more dangerous for children than these other drink options.

A report published in the medical journal Pediatrics claims that giving kids energy drinks could be severely dangerous to their health. The high levels of caffeine and similar ingredients could be bad for a child’s heart that is not yet strong enough to handle the boost. Heart palpitations, seizures, strokes and even sudden death were all warned to be potential hazards.

One energy drink can have four to five times more caffeine than soda, and some kids are drinking multiple ones each day. This has lead to an increase in health problems related to the surge of adrenalin it gives. For one boy, Dakota Sailor, 18, a high school senior in Carl Junction, Missouri, the threat is real. After only drinking two energy drinks last year he found himself hospitalized for five days. The result of caffeine induced seizures.

A safe level of caffeine has not yet been established for children. Most energy drinks are created with adult use in mind, not kids. So there has been little research on what can happen when a child drinks one or more of the highly caffeinated drinks.

“We would discourage the routine use” by children and teens, said Dr. Steven Lipshultz, pediatrics chairman at the University of Miami’s medical school. He wrote the report with colleagues from that centre.

Late last year, the American Association of Poison Control Centers began tracking overdoses on the powerful energy drinks. From October through December, there were 677 reported overdoses. This year there have already been 331 reported. Of the cases reported this year, one fourth of them so far have involved children younger than 6 years old.

A clinical report from the American Academy of Pediatrics is expected soon to offer guidelines for how much caffeine is safe for young children. However, some feel the guidelines should simply state zero. Dr. Marcie Schneider, an adolescent medicine specialist in Greenwich, Connecticut, says these drinks have no place in the diets of children. She warns against letting children of any age have energy drinks.

“These drinks have no benefit, no place in the diet of kids,” Schneider said.