Home » Eric Dane & Rebecca Gayheart Step Out With Their Girls in LA!

Here she is! Eric Dane and Rebecca Gayheart have finally introduced us to their daughter Georgia. The happy family was photographed returning to their car after having some pizza in West Hollywood on Monday(August 6th). 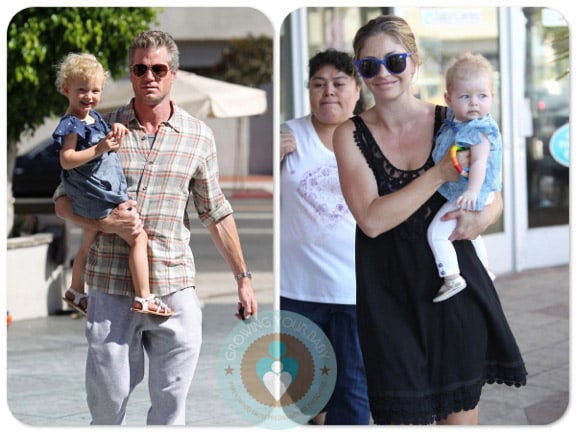 The baby, who arrived on December 28th, looks just like her sister with her blonde hair and blue eyes.  Now, 8 months old she must also be teething because Rebecca had a wooden HABA teether with her while carrying the tot to the car.

Billie was all smiles in her dad’s arms.  She is probably enjoying all of the family time they are likely spending together now that he won’t be returning to Grey’s Anatomy.  Two weeks he announced his departure saying,

“I am extremely grateful to everyone at Grey‘s, ABC and Shondaland for the experience and memories I have had over the course of this run. It has been wonderful to work alongside and learn from a creative force such as Shonda Rhimes.”

If you are a fan of the show then you were probably at the edge of your seat last season during the finale wondering if he was going to be killed off like his co-stars Kim Raver and Chyler Leigh.

TVLine reports that Eric’s character won’t be completely gone from Grey’s Anatomy when it returns for its ninth season on Sept. 27.  He is expected to survive and return for a proper send-off.

Until then we will enjoy watching him out with his girls.  Aren’t they cute?