Home » Even for Healthy Children, the Flu Can be Deadly 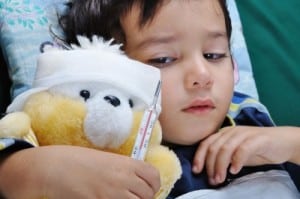 Parents everywhere dread flu season because children everywhere catch the flu bug. But how many of us actually think about how dangerous this common bug can be? Probably not many. Yet, no matter how little we think about the possible dangers, they do exist. And the potentially fatal effects aren’t just for children who are already sick; even healthy children can die from the flu. Martin McGowan was one of those children.

Martin was a healthy 15-year-old boy. On the day of baseball tryouts, he wasn’t feeling very well. Despite his mother’s concerns, Martin insisted that he had to go to school that day or he would miss his chance at getting on the team.

After tryouts, Martin seemed exhausted and he started complaining of leg pains. That night, he woke up vomiting. His mother, Diane McGowan, gave him medicine for his fever and he went back to bed. But it wasn’t long before Martin awoke again, vomiting and complaining of leg pain. Diane decided to take him to the emergency room. Doctors diagnosed him with the flu and a condition known as “compartment syndrome.”

“Because the muscle has no room between the skin and bone, it causes pressure on the arteries and veins with your bone, and can eventually cut off circulation,” Diane told CNN. “So if they had not taken him into surgery…they might have had to amputate his legs.”

But Martin didn’t make it out of the operating room; he died that day on the table.

“What I later found out is that the flu attacks the muscles, and that’s why you feel achy when you get the flu,” Diane said. “Because he was so healthy, and because of the exertion he had done the night before, it went through his system quicker than it would go through a normal child…The heart is a muscle, and his heart gave out on the table.”

The complication that caused Martin’s death is rare, but the flu can produce other complications that have fatal potential: pneumonia, acute respiratory failure, bacterial infection and encephalitis, just to name a few. These complications can arise in even the healthiest of children.

The potential effects of the flu on all children, healthy and ill alike, is now known because of research presented at the IDWeek2012 conference – the first conference held by a consortium of infectious disease groups. After examining the deaths of children over the last eight flu seasons, they found that 18 children had died from influenza-associated causes.

Many of those children had underlying conditions (asthma, lung disease, neurological disorders, genetic and chromosomal disorders), but 40% of those deaths occurred in children with no known medical condition. What’s more, the researchers said that the healthy children actually died faster than those with underlying conditions; healthy children had a median of four days from symptoms to death while children with pre-existing health conditions had a median of about seven days.

So what can a parent do to help avoid potentially fatal effects of the flu in their children? As with most things, prevention is the best approach.

“Because influenza-associated deaths can occur rapidly in children, prevention really is the best defense,” said Dr. Karen K. Wong of the Centers for Disease Control and Prevention.

She says that over a third of those deaths were in children under the age of five and 11% occurred in children younger than 6 months of age. Unfortunately, children under six months of age are too young for flu vaccines, but yearly vaccines are recommended. By vaccinating others in the family, including themselves, parents can help prevent the flu in their youngest family members. Additionally, vaccines are especially important for certain groups of people, including those in the health care industry, those that provide care for young children and children with medical conditions.

At the time of Martine’s death, Diane says the flu vaccine wasn’t recommended for children Martin’s age. Vaccines are now recommended for all individuals, but especially children. And no matter what the family’s income, there are options in almost every area for vaccination. But school-based influenza vaccination programs may be the best solution to help prevent the spread of the flu virus.

While not available at this time, information on a study that involved a school-based program was presented along with the data on pediatric flu deaths. Dr. Pia Pannaraj, an assistant professor of pediatrics at the University of Southern California and Children’s Hospital Los Angeles presented the information.

“We looked at a proactive approach for how to prevent influenza,” Pannaraj said.

Pannaraj says that vaccination of school-aged children is important, not just for the children themselves, but for the whole community.

“Children are very capable of spreading the flu,” Pannaraj said. “They go to school, they’re in their classrooms, they’re all together – they touch each other, touch doors, pass around papers and pencils.”

Then they go home to family members, possibly passing the virus onto parents, younger siblings and elderly grandparents – younger children and the elderly are at the highest risk for becoming severely ill from the flu.

All of this can be solved, Pannaraj says, with the help of a school-based influenza vaccination program. In her study, which followed 4,500 elementary school students, took place in Los Angeles County during the 2010-11 flu season. Half of the children in the study received a flu vaccine via a school-based vaccination program. The schools who did not offer the program served as the control. Children at all schools were tested for influenza if they started displaying flu-like symptoms: fever, runny nose, cough or respiratory symptoms.

In the schools where vaccines were offered, 30% to 50% of the children received a flu vaccine. In these schools, the high vaccination rate benefits were easily apparent.

Vaccination, while the first line of defense, does not always prevent the flu. The vaccine’s main purpose is to help prevent extreme symptoms, particularly the respiratory symptoms. If and when children do end up with the flu, the CDC says that antiviral medications like Tamiflu and Relenza can be given. These can help ease symptoms and reduce the duration of illness, according to Wong.

Just as important as medication, parents should help children with the flu rest and water is essential. Anti-fever medications can be given if the fever gets too high. Cuddles, hugs and lots of stories can also be helpful while your child recovers. If, however, you notice any alarming symptoms, take your child to the doctor or emergency room.