Last year Evenflo announced their SensorSafe-equipped car seats which were designed to alert caregivers when a child is still in the car seat when the car has been turned off. 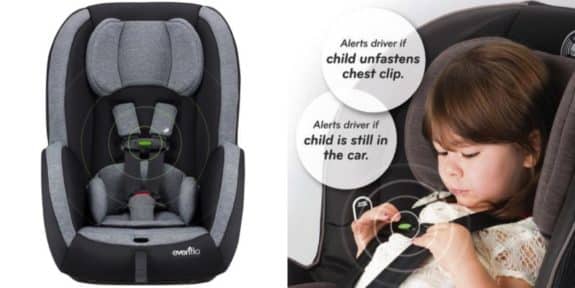 As of July 31, the number of children across the United States who have died of heatstroke after being left in hot cars was 29 – a record high.

More deaths at this point than previous years, 11 of those deaths occured in July.

To combat this Sen. Richard Blumenthal, D-Conn., and Sen. Al Franken, D-Minn. introduced legislation on July 3 requiring new cars come equipped with technology that alerts drivers if a child is left in the back seat once the car is turned off.

Evenflo’s SensorSafe-equipped car seats alert caregivers when a child is still in the car seat when the car has been turned off.

“We understand purchasing a new car with child-sensing technology isn’t an option for many new families,” said Chamberlain. “This is why we’re pricing Evenflo SensorSafe technology to be within anyone’s reach. For less than you’d expect, you can have peace of mind now,” he said.

Often with hot car deaths an exhausted parent forgets their child in the car. Many times that happens on the way to work or on a day when their routine has changed.

This past week was especially heartbreaking after 2 babies were found dead within hours of each other in Arizona.

Having a car seat that alerts you when the baby is still in car could eliminate these deaths altogether.