Tis the season for fresh fruit and vegetables.  But which ones should you be grabbing from the organic counter?

Every year the Environmental Working Group (EWG) releases their ‘dirty dozen’, a list the group compiles after they analyze test results of more than 35,200 samples of fruits and vegetables taken by the U.S. Department of Agriculture and the Food and Drug Administration.

For the past 5 years the apple has take the top spot on the group list as the produce with the highest pesticide residue, but that has changed for 2016.  The apple has been dethroned by the beloved strawberry. 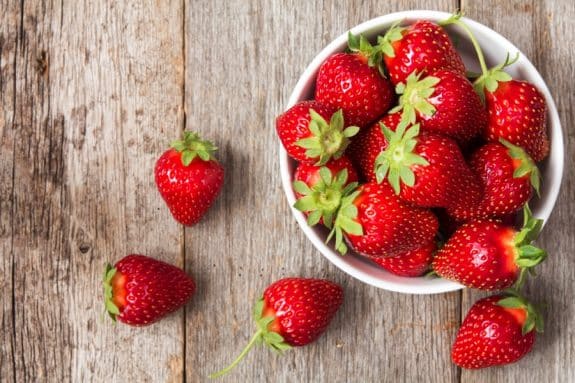 And for good reason…  Nearly all of the (non-organic) strawberry samples – at least 98 percent – had detectable pesticide residues, with 47 percent having residues of 10 or more pesticides. Some samples showed residue from 17 different pesticides.

Some are fairly benign. But some are linked to cancer, reproductive and developmental damage, hormone disruption and neurological problems. Among the worst:

“It is startling to see how heavily strawberries are contaminated with residues of hazardous pesticides, but even more shocking is that these residues don’t violate the weak U.S. laws and regulations on pesticides in food,” Sonya Lunder, EWG Senior Analyst, said in a statement. “The EPA’s levels of residues allowed on produce are too lax to protect Americans’ health. They should be updated to reflect new research that shows even very small doses of toxic chemicals can be harmful, particularly for young children.”

The EWG also revealed that strawberry growers use jaw-dropping volumes of poisonous gases – some developed for chemical warfare but now banned by the Geneva Conventions – to sterilize their fields before planting, killing every pest, weed and other living thing in the soil.

This may be the year to start growing your own…

The complete list of the 2016 “Dirty Dozen” included many popular fruits and vegetables:

On the flip side, avocados lead the list of the group’s “Clean Fifteen” list, with less than one percent of samples showing any detectable pesticides.   The EWG also noted:

The “Clean Fifteen” fruits and vegetables highlighted by the report are:

To limit exposure to these chemicals, the group recommends purchasing organic for the fruits and vegetables that ranked high in pesticide residue in the report.

“Fruits and vegetables are important for your health,” Lunder said. “But for those on the Dirty Dozen, we recommend buying the organic versions if you want to avoid pesticides on your food.”